Halo Protects Romain Grosjean From Serious Injury After His Car Crashed in F1 Bahrain GP; Take a Look at ‘What Is Halo’ and Its Safety Functions

Grosjean suffered a 56G impact when his car crashed, which resulted in the front half of the car smashing through the three-tier steel barriers. The rear half was ripped off and the fuel tank was also damaged. Grosjean was not hurt despite his car hitting the barrier as the halo over his head cut through the steel barrier and protected him. 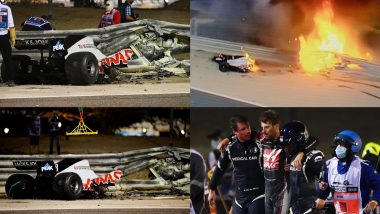 Romain Grosjean and His Car After the Crash (Photo Credits: Twitter)

Formula One driver Romain Grosjean escaped without any serious injuries after his car burst into flames following a crash just moments after the start of the Bahrain Grand Prix on Sunday. The incident occurred in the first lap when Grosjean slid off the track and his Haas racing car ignited after being sliced into two by a steel barrier. The Swiss driver, however, escaped unhurt and climbed out of the car in time before the fire blazed. Grosjean, it appears, was protected by the Halo which cut through the steel barrier and protected the driver preventing his head from crashing straight into the barrier. Here we take a look at the Halo in F1 cars and its functions. Romain Grosjean, F1 Driver, Escapes After Horror Crash at Bahrain GP (Watch Video)

Grosjean suffered a 56G impact when his car crashed, which resulted in the front half of the vehicle smashing through the three-tier steel barriers. The rear half was ripped off as the car spinned on impact while the fuel tank was also damaged releasing the fuel that ignited a huge blaze. Grosjean, however, was not hurt despite his car hitting the barrier as the halo over his head cut through the barrier and protected him. His team’s efforts were also equally important in Grosjean escaping unhurt from the crash. Take a look at what is the Halo in F1 vehicles.

A Halo in F1 cars is a driver crash protection system, which consists of a curved bar placed above the head of the driver to protect his head. The system consists of a titanium bar that surrounds the driver’s head. The structure sits above the car’s cockpit. The protection system has been made mandatory on every vehicle in Formula 1, Formula 2, Formula 3 and Formula E. The new safety measure will also be made mandatory in Formula 4 from next season.

What is Its Function?

After all that, the halo is still intact. pic.twitter.com/hyUODjfiA7

When was it introduced in F1?

Following tests conducted by FIA assessing the crashes that take place in F1 races, such as collision between two vehicles, contact between a vehicle and barriers or flying debris, the Halo was introduced in racing cars. Dallara F2, a new formula 2 car, was the first to install the Halo system. It has become a mandatory feature in racing cars since 2018.

Grosjean’s car crashed at a service road point during the first lap. His vehicle caught fire almost immediately but the driver managed to escape unhurt. He was able to get out of the car and then climbed over the barriers. The medical crew rushed to the scene immediately and Grosjean was later taken to a local hospital for a regular check-up. He was reported to have light burns on hands and ankles but no serious injuries.

(The above story first appeared on LatestLY on Nov 30, 2020 01:09 AM IST. For more news and updates on politics, world, sports, entertainment and lifestyle, log on to our website latestly.com).