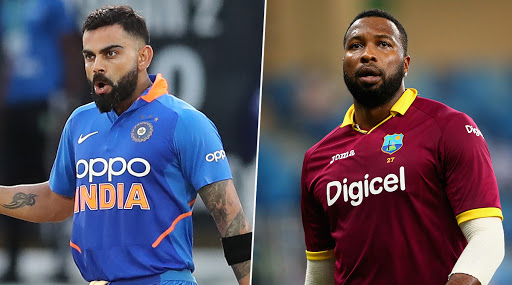 After coming out in top in the three-match T20I series, India’s focus will now shift towards the One Day internationals. The first game of the three-match ODI series will be played at the MA Chidambaram Stadium in Chennai on December 15, 2019 (Sunday). Both the teams have distance between them in the ICC ODI rankings as India are ranked second in the world while West Indies are placed ninth. The Caribbean team leads in the ODI head-to-head record, as in the 90 matches played the Caribbean side had 53 victories to India’s 35 while one match was tied and one ended in no result. In the last five meetings, India have won four matches while one ended in no result. India Vs West Indies, Cricket Score 1st ODI Match.

India have a few injury concerns as pacer Bhuvneshwar Kumar picked up a knock in the final T20I game and will be unavailable, so Mumbai bowler Shardul Thakur has been selected as a replacement. A knee injury had already ruled explosive opening batsmen Shikhar Dhawan out of the series and that has seen youngster Mayank Agarwal come into the squad. India vs West Indies Dream11 Team Prediction: Tips to Pick Best Playing XI With All-Rounders, Batsmen, Bowlers & Wicket-Keepers for IND vs WI 1st ODI Match 2019.

Coming into this series, West Indies will look to build on a positive showing in the shortest format of the game. They clean-swept Afghanistan in their last ODI series and will take confidence from that. The ODI squad looks very different to the side that played in the T20Is as Shai Hope, Roston Chase, Alzarri Joseph and Sunil Ambris all come in while there is no place for the powerhouse Andre Russell. Before the 1st ODI, we take a look at the result of the last five matches.

West Indies posted a total of 240/7 in their 35 overs as the play was reduced due to rains. Chasing a target of 256, India lost Rohit Sharma early but Kohli and Dhawan steadied the innings before Kohli went on to get yet another hundred. Iyer’s knock of 65 runs off 41 deliveries took the Men in Blue over the line.

The second match of the series was also interrupted by rains. After winning the toss, India elected to bat first and with the help of yet another ODI ton from Kohli and a quick-fire half-century from Iyer, reached a total of 279 in their 50 overs. The West Indian batting line-up crumbled in front of India’s pace attack no batsmen other than Evin Lewis showed some fighting spirit.

The first match of the series was abandoned as the rains caused trouble throughout the day and when it stopped pouring, the pitch was not good enough to be played on, so the Umpires decided to call-off the match. Winning the toss, the Caribbean side elected to bat first and after scoring 54 runs in 13 overs, the heavens opened up.

This match was played in the 2019 ICC Cricket World Cup and West Indies were no match for the Indian side. Electing to bat first, India posted a total of 268 runs with Virat Kohli and MS Dhoni reaching half-centuries. The Caribbean side were no match for the Men in Blue’s bowling attack as they were bowled out for 143 runs.

West Indies elected to bat first after winning the toss and succumbed to the pressure put on by the Indian bowlers. They were two wickets down with two runs on the board as Powell and Hope departed without scoring. Samuels and Holder gave a good account of themselves but were no match for India as they were all out for 104 runs. The Men in Blue made easy work of the chase as Rohit Sharma helped himself to a fifty.

India will be the firm favourites in this match but can expect a tough fight from the Caribbean side.