Nearly 45 countries have taken part in the Islamic States Games events so far, with Turkey topping the medal tally so far. The host nation of fifth edition of ISG 2021 won 305 medals including 95 golds, while Azerbaijan sit second with 201 medals in the medal standings. Scroll down below to check the medal tally. 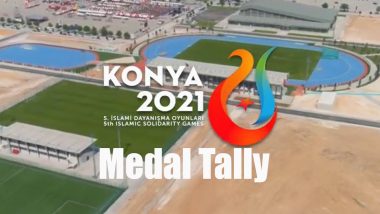 Turkey continued their dominance at ISG 2022 as they finished the sporting event with 340 medals with 144 golds. Uzbekistan are in second spot with 157 medals including 51 golds while Iran sit third with 133 medals. The Islamic Solidarity Games 2021 is here as the fifth edition of the event is going to get underway from August 9 to 18. This multi-sports sports event is organized by the Islamic Nations all over the world in which athletes from Islamic countries compete in various sports categories for honours. The Islamic Solidarity Games (ISG), which was supposed to be held in 2021, was postponed due to Covid-19 pandemic. The fifth edition of ISG 2021 is slated to be held in Konya, Turkey. This event is the symbol of Islamic values which are offered to the participants. Nearly, 57 nations that are involved in Organization of Islamic Conference (OIC) will take part in this event in Turkey. ISG 2021: List of Countries Participating at Islamic Solidarity Games in Konya

Nearly 45 teams have participated so far in the previous four editions of the Islamic Solidarity Games. Turkey is the most successful nation in the medal standings as the host nation of fifth edition have clinched 305 medals including 95 golds, 100 silvers and 110 bronzes. Azerbaijan sit second on the medal table with 201 medals in which they clinched 85 golds. Iran, Egypt and Indonesia are the other counties who are in the top five in the medal standings with 186, 146 and 166 medals respectively. Islamic Solidarity Games 2021 Schedule and Venue: Know History of ISG Ahead of 2022 Edition in Konya

The first edition of the Islamic Solidarity Games was held in 2005 in Mecca, Saudi Arabia. More than 7000 athletes took part in this tournament from 54 nations. Nearly 13 sporting events were organized in the debut edition. Unlike other global sports events, the ISG allows only male participants to compete. Since then, three more ISG events were scheduled to be held but only two were successfully organized.

(The above story first appeared on LatestLY on Aug 09, 2022 04:39 PM IST. For more news and updates on politics, world, sports, entertainment and lifestyle, log on to our website latestly.com).