In this week episode of Monday Night Raw, we saw Seth Rollins and Rey Mysterio in a verbal conversation through a video conference. Mysterio vowed that he will recover from injury soon and take the revenge from Rollins after what he did with him. 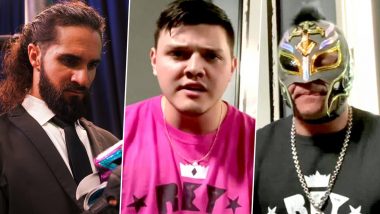 In this week episode of Monday Night Raw, we saw Seth Rollins and Rey Mysterio in a verbal conversation through a video conference. Mysterio vowed that he will recover from injury soon and take the revenge from Rollins after what he did with him. This spat between Mysterio and Monday Night Messiah started a few weeks back and in the corresponding week we also saw the presence of Dominik who warned Rollins for what's gonna come to him in coming days as he ended his speech with 'An eye for an eye'. Rey Mysterio in his latest tweet said to Seth Rollins that, 'You're gonna pay'. WWE Raw June 8, 2020 Results and Highlights: Edge Joins Christian on ‘The Peep Show’ Ahead of His Match Against Randy Orton at Backlash (View Pics)

On May 11, 2020, episode of Raw we saw Rey Mysterio's eyes getting pressed against steel ring steps by Seth Rollins. This incident happened during tag team match between Seth Rollins, Buddy Murphy and Rey Mysterio, Aleister Black. To further humiliate Mysterio, Seth Rollins even went on to conduct his retirement ceremony. Rey Mysterio hasn't himself confirmed anything about his retirement, however, in this storyline his son Dominik has a good opportunity to get a good start in WWE. Dominik can't expect a start better than having his debut match against a top-rated superstar like Seth Rollins. We have seen a bit of Dominik's aggressive side during Mysterio vs Brock Lesnar match at Survivor Series 2019. Brock Lesnar Likely to Return at SummerSlam 2020; Will The Beast Incarnate Get Another Shot to WWE Title?

Dominik Says 'An Eye For an Eye'

.@reymysterio is furious with @WWERollins for what he did to him & what he put his family through, and he can never forgive The #MondayNightMessiah. After Rey left the room, Dominik had a warning for Rollins about what may lie ahead for him: “An eye for an eye.” #WWERaw #SSWWE pic.twitter.com/77xW7apmQB

It will be interesting to see how WWE plans script for Seth Rollins rivalry with Rey Mysterio and Dominik in coming days. But before that fans will eagerly wait for the greatest wrestling match ever between Edge and Randy Orton at Backlash 2020.

(The above story first appeared on LatestLY on Jun 10, 2020 05:28 PM IST. For more news and updates on politics, world, sports, entertainment and lifestyle, log on to our website latestly.com).