Ritu Phogat Birthday Special: Lesser-Known Facts About the MMA Fighter As She Turns 26

A Former Commnwelath Wrestling Championships gold medallist and daughter of the famous wrestling household in the India, Ritu Phogat Shifted to Mixed Martial Arts (MMA) in 2019 with an aim of carving out at least one woman champion from India in the sport. Despite hailing from a family of wrestling loyals and great women's wrestlers, Ritu was always an avid fan of the MMA. 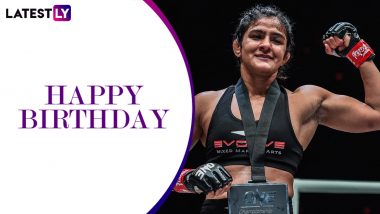 Ritu Phogat celebrates her 26th birthday. Phogat, who made headlines for being the first from the wrestling loyal Phogat family to shift into Mixed Martial Arts (MMA), is a former gold medallist at the Commonwealth Wrestling Championships. Ritu Phogat is the third daughter of former wrestler Mahavir Singh Phogat and younger sister of Babita, Geeta. Her cousin Vinesh Phogat is the first Indian women to win an Asian Games gold medal while her elder sister Geeta is the first-ever gold medallist from India at the Commonwealth Games and the first-ever female wrestler from the country to qualify for the Olympic Games. Ritu Phogat Says She's Focussed on Becoming Mixed Martial Arts Champion.

Having been part of one sporting revolution in the country – introducing women to the wrestling world – Phogat decided on March 2019 that she would initiate another sporting revolution in India – that of carving out at least one MMA champion from the country of a billion. The 25-year-old, who had followed MMA through YouTube videos since 2012, had decided to change her game. “I used to watch it on YouTube since 2012. I would always think, ‘Why does India not have a world champion in this sport?’" she had said in an interview with Live Mint. Then the offer came from Evolve and she was on her way to carving her own path. On her 26th birthday, take a look at some interesting facts about Ritu Phogat.

In February 2019, Ritu signed with ONE Championship and made her MMA debut against Nam Hee Kim in 52kg atomweight division at the ONE Championship: Age of Dragons in November last year and beat her via a knockout. In her second match, Ritu faced Chiao Chen Hu in the same division and beat her opponent via a unanimous decision.

(The above story first appeared on LatestLY on May 02, 2020 08:30 AM IST. For more news and updates on politics, world, sports, entertainment and lifestyle, log on to our website latestly.com).