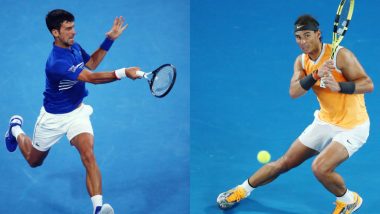 The 2019 Australian Open final will be the 53rd meeting between the two stars. Djokovic leads the head-to-head record with 27 wins with 25 going Nadal’s way. However, when it comes to majors, it is Nadal who dominates with nine victories against five. This happens to be their eighth Grand Slam final and Nadal leads with four wins.

Meanwhile, Nadal made it to the summit clash after defeating 20-year-old Stefanos Tsitsipas 6-2, 6-4, 6-0 in the semis. Djokovic, on the other hand, outplayed Lucas Pouille 6-0 6-2 6-2 to set up the finals with Nadal.  Novak Djokovic vs Rafael Nadal, Australian Open 2019 Final Preview: Spaniard Takes on Six-Time Winner in The Men's Singles Grand Slam Final Match

As Sony Pictures Networks has the broadcast rights, the live online streaming of Rafael Nadal vs Novak Djokovic Australian Open 2019 men’s singles final will be available on its OTT platform SonyLIV mobile app and website.

(The above story first appeared on LatestLY on Jan 27, 2019 12:40 PM IST. For more news and updates on politics, world, sports, entertainment and lifestyle, log on to our website latestly.com).