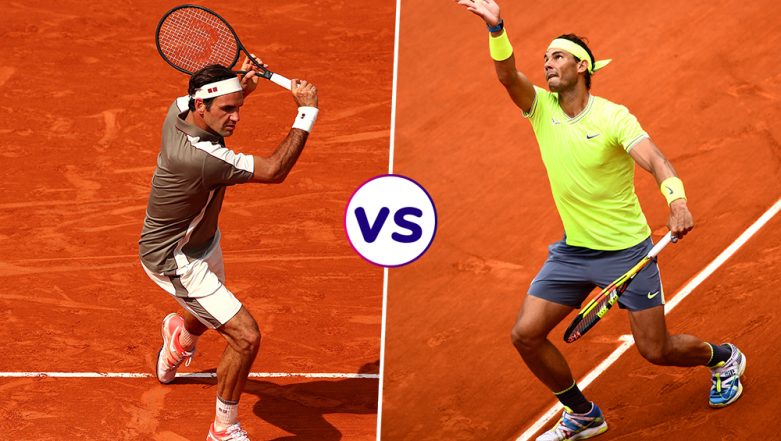 Swiss great Roger Federer and King of Clay Rafael Nadal will face each other for the 39th time in their careers as the Swiss maestro and the Spaniard battle it out in the semi-finals of French Open 2019. Often dubbed as the greatest rivalry in the history of sports, the tennis greats are ready to face each other at the Roland Garros for the sixth time. If you are looking for live telecast and free streaming online details of Roger Federer vs Rafael Nadal semi-final (SF) match in French Open 2019, you will find it all here. Also, get information on match timings in IST (Indian time) and TV channels doing the live coverage of the game. Roger Federer vs Rafael Nadal Head to Head Record: Ahead of French Open 2019 Semi-Final Clash, Here're Previous 6 Match Results Featuring Great Rivals.

Federer has won 20 Grand Slam titles, more than any other player in the history of men's singles tennis. Nadal, with his 17 Grand slams, is at the number two spot in the list and is only behind Federer. However, when it comes to the head to head battles (H2H), Nadal leads Federer 23-15 on all surfaces. Nadal is even more dominating on clay, and has beaten Federer five times at Roland Garros, including four French Open finals.

The Roger Federer vs Rafael Nadal match is scheduled to begin at 4.20 PM (Indian Standard Time). The contest will be played at the Philippe-Chatrier Court.

The Roger Federer vs Rafael Nadal match can also be viewed online. Video streaming platform Hotstar will play the live streaming of the match. Fans can watch the full match on Hotstar.

Though Nadal leads Federer by 23-15 in career battles, Federer has won the last six matches against the Spaniard. The 37-year-old Roger Federer and 32-year-old Nadal first faced each other in the year 2004. Ever since, Federer and Nadal have given fans numerous matches and moments to remember and the fans are hoping that today's semi-final clash in Roland Garros 2019 will be no different. For the records, Federer is playing in his 44th Grand Slam semi-finals and Rafael Nadal is chasing an unprecedented 12th French Open title at the Roland Garros.