The Olympic Games, beginning on Friday, is the world's biggest sporting extravaganza but in the Japanese capital, which is the host city, there is clear lack of enthusiasm. 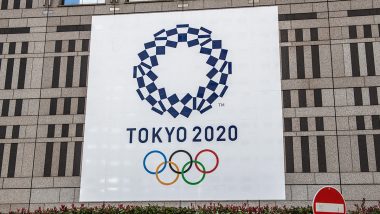 Tokyo, July 22: The Olympic Games, beginning on Friday, is the world's biggest sporting extravaganza but in the Japanese capital, which is the host city, there is clear lack of enthusiasm. According to media reports, the local public is largely indifferent which is understandable, considering that the Games are being held in the times of the Covid-19 pandemic.

"For Tokyo locals, concern has been replaced by indifference. A thriving city enthusiastically hosting a global sporting event is a sight to behold. Right now, Tokyo is not one. That is hardly the fault of the Japanese. With about 80% of the population opposed to the Olympics, fans banned from attending events and Covid numbers surging, it is little wonder the streets are not alive with joy. But the silence - and an absence of signage, flags and adornments - is stark," said a report in The Guardian newspaper. Tokyo Olympic 2020: Naomi Osaka Makes Her Return Against Zheng Saisai in Olympic Tennis Tournament.

Those arriving in Tokyo for the Games have to go through multiple checkpoints. At each of these checkpoints, paperwork is inspected, QR codes scanned and questions are asked.

The visitors like journalists and officials will be confined to their hotels, venues and the main press centre for the next 15 days. A GPS-linked app has been placed on every phone and if the visitor goes beyond the activity plan that he mentioned at the time of arrival, he runs the risk of being deported.

The visitors are allowed only a 15-minute visit to the approved mini-marts in their immediate vicinity. "In Tokyo, that [joyous] atmosphere is conspicuously absent," added the report. Even the local newspapers had raised the issue recently with Japanese newspaper Asahi Shimbun questioning the feasibility of hosting the Games. "If the highly divisive Tokyo Olympics are staged without the public's blessing, what will have been gained and lost?," it had questioned.

(The above story first appeared on LatestLY on Jul 22, 2021 12:24 PM IST. For more news and updates on politics, world, sports, entertainment and lifestyle, log on to our website latestly.com).