These casualties are the earliest reported deaths from Ukraine's sports fraternity as the Russian invasion of the country continues. Earlier, FIFA, UEFA and IOC banned Russian athletes from all international events. 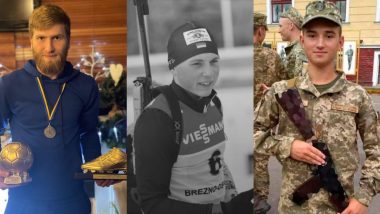 Two Ukrainian footballers have reportedly lost their lives in the ongoing war against Russia. Vitalii Sapylo and Dmytro Martynenko were confirmed to be among the many casualties in the current conflict. FIFPro, which is a global union of professional footballers, confirmed this development on Twitter. They wrote, "Our thoughts are with the families, friends, and teammates of young Ukrainian footballers Vitalii Sapylo (21) and Dmytro Martynenko (25), football’s first reported losses in this war. May they both rest in peace."  Russia-Ukraine Crisis: Ukrainian Footballers Call for Support Against ‘ False Propaganda’ Amidst Russian Invasion (Watch Video)

Our thoughts are with the families, friends, and teammates of young Ukrainian footballers Vitalii Sapylo (21) and Dmytro Martynenko (25), football’s first reported losses in this war.

May they both rest in peace. pic.twitter.com/f6l9oHHRMr

Dmytro Martynenko was at home with his mother. They are believed to have died when Russian forces bombarded their home in Kyiv. Martynenko used to play for FC Gostomel. Russian Tennis Star Anastasia Pavlyuchenkova Urges to End War with Ukraine

Sapylo on the other hand, used to play for the youth team of Karpaty Lviv, a club in Ukraine's third division. He is reported to have been killed by an airstrike in Ukraine's capital city Kyiv, last week. The young goalkeeper had enlisted himself in the Ukraine army. His father expressed grief at this development as he, quoted by Germany's Bild, said, "He was such a happy, fun-loving boy. It was an airstrike by that damn Putin. He took my child from me.'He really wanted to fight. First, one tank broke down, then the second. But under no circumstances did he want to leave the front. He asked for a third party. This armour has brought him eternal sleep."

Apart from these two footballers, there were other casualties in the war from Ukraine's sports fraternity. Yevhen Malyshev, a skier was also killed in the ongoing conflict. The International Biathlon Union confirmed his death in a statement.

(The above story first appeared on LatestLY on Mar 02, 2022 04:34 PM IST. For more news and updates on politics, world, sports, entertainment and lifestyle, log on to our website latestly.com).