When Is Conor McGregor's Fight With Dustin Poirier: Know UFC 264 Date, Time, Previous Results and Other Details Ahead of Trilogy 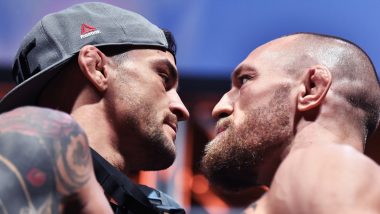 The two meetings between the fighters have given us some of the best moments in MMA history and the third fight looks set to deliver on that potential once again. Both have had very different career paths so far with Conor McGregor becoming the first man in UFC to hold simultaneous championships (Featherweight and Lightweight) while Dustin Poirier is a former UFC Lightweight interim champion. Khabib Nurmagomedov Remembers Father on his First Death Anniversary.

Conor McGregor will face Dustin Poirier for the third time at UFC 264 Pay-per-view. The event will be held at T-Mobile Arena in Las Vegas. The preliminary card will start at 05:30 am IST (Indian Standard Time) on July 11, 2021 (Sunday) with the main PPV beginning at 07:30 am IST.

How to Watch UFC 264: Conor McGregor vs Poirier 3 Live Streaming Online and Get Telecast Details

Sony Sports network are the official broadcasters of UFC in India and will telecast UFC 264: Conor McGregor vs Poirier 3 live. The PPV will be telecasted on Sony Ten 2 SD/HD or Sony Six SD/HD in English while Sony Ten 3 and Sony Ten 3 HD will telecast the event live in Hindi. UFC 264 live streaming will be available on SonyLIV and fans can catch the action live on the SonyLIV website or app.

What Are Conor McGregor and Dustin Poirier’s Record in UFC?

Conor McGregor and Dustin Poirier have met each other twice in the UFC with both fighters winning one match each. The Irishman won the opening encounter between the two at UFC 178 while the American leveled the score at UFC 257. Both matches ended in TKO in the winner's favour.

(The above story first appeared on LatestLY on Jul 09, 2021 04:57 PM IST. For more news and updates on politics, world, sports, entertainment and lifestyle, log on to our website latestly.com).