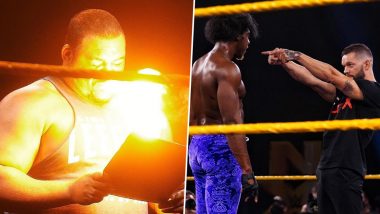 In the other segment of NXT, we saw, Mercedes Martinez and Aliyah defeat  Kacy Catanzaro & Kayden Carter. Bronson Reed emerges victorious against Damian Priest proving that he did not earn the opportunity for North American title by fluke. Mia Yim won against Indi Hartwell. Adam Cole and The Undisputed Era interrupted Drake Maverick vs Killian Dain match. Cole challenged Pat McAfee to confront him next week on NXT.

@miayimofficial is trying to keep @realkeithlee calm, but is he going to be ok after the actions of @wwekarrionkross & @realscarlettbordeaux?!

#VelveteenDream & @finnbalor have come face-to-face once again! What will happen next week on #WWENXT?!

(The above story first appeared on LatestLY on Aug 13, 2020 12:55 PM IST. For more news and updates on politics, world, sports, entertainment and lifestyle, log on to our website latestly.com).