WWE News: CM Punk’s Advice to Rey Mysterio for Revenge on Seth Rollins, Details About Retribution and Other Interesting Updates You Need to Know 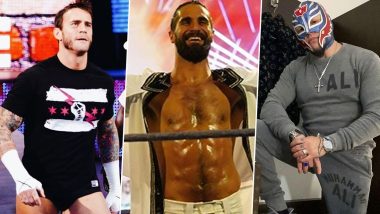 WWE fans must be very excited as we are just more than one week away from SummerSlam 2020, which is the second-most mega event in WWE after WrestleMania. But before we move to SummerSlam 2020, we should make you aware of this week's current happening in WWE. We have already witnessed an exciting episode of Raw this week where the action from Shane McMahon's Raw Underground continued and also Retribution faction continue to damage properties at WWE Performance Center. Scroll down to know about top WWE news which includes CM Punk advice to Rey Mysterio for revenge on Seth Rollins. WWE News: From Goldberg Calling Roman Reigns ‘A Joke’ to Brock Lesnar's Return Chances at Raw Underground, Here Are 5 Interesting Updates You Need to Know.

On this week episode of Raw, we saw Seth Rollins brutally assault Rey Mysterio's son Dominik Mysterio by kendo stick strike. This took place immediately after Dominik and Rollins signed the contract for their match at SummerSlam 2020. After Rey Mysterio went on to post on Instagram that Seth Rollins will pay for it, to which CM Punk commented in his unique way. Punk advised Rey to shave off Seth Rollins head. He said so recalling WWE Over The Limit 2010 pay per view, which saw Mysterio defeat him in a Straight Edge Society Pledge vs. Hair match. Rey shaved Punk's head after that bout.

We have already witnessed two editions of RAW Underground where The Viking Raiders, The Hurt Business and Shayna Baszler have already displayed their performance. Wrestling journalist Tom Colohue revealed on the latest edition of the Dropkick DiSKussions podcast that RAW Underground was entirely Shane McMahon's idea. Shane McMahon's creative influence has considerably grown backstage and people in WWE are reportedly quite impressed with his new creation. WWE Raw Aug 10, 2020 Results and Highlights: Randy Orton Hits Ric Flair With Punt Kick, Seth Rollins Assaults Dominik Mysterio After The Contract Signing For Their Match at SummerSlam 2020.

Since the past two weeks have seen the Retribution invading over Raw and SmackDown. On the last week's episode of SmackDown, we saw these black-masked guys even attack a female talent in the audience. As per Dave Meltzer latest podcast episode this past Sunday, WWE is using its fill-in performers to work the angle, which aped the old Nexus debut in that the group trashed ringside and beat up everyone they could lay hands on. NXT wrestlers Tommaso Ciampa and Dominik Dijakovic have both been linked to the Retribution, as these two wrestlers have blacked their social media accounts out over the past week. However, there is not yet any official confirmation.

Samoa Joe has been out of action since February this year due to injury. Since then the former United States Champion has been doing well on the commentary box. The leader of 'The Hurt Business' MVP in his recent interview with Newsweek, revealed that Samoa Joe is going to be back in action soon, and he would love to face the former TNA star in the WWE ring.

The famous couple of WWE Johnny Gargano and Candice LeRae will take NXT fans to their home tour in the upcoming episode of WWE NXT. The Power Couple will have a lot to say especially after seeing NXT North American Championship and NXT Women’s Championship opportunities slip through their fingers in recent weeks.

What a wonderful Wednesday night it's going to be as The Power Couple™ invite you in to our home once again. The Gargano's have some bones to pick and to chew..

It may also be the most anticipated on screen debut in NXT history. pic.twitter.com/DiU0jb01qM

Fans will now wait for WWE SmackDown where it will be interesting to see Triple Brand Battle Royal which will determine Bayley's challenger for the title match at SummerSlam 2020. Stay tuned with LatestLY for more updates on WWE.

(The above story first appeared on LatestLY on Aug 13, 2020 09:01 AM IST. For more news and updates on politics, world, sports, entertainment and lifestyle, log on to our website latestly.com).