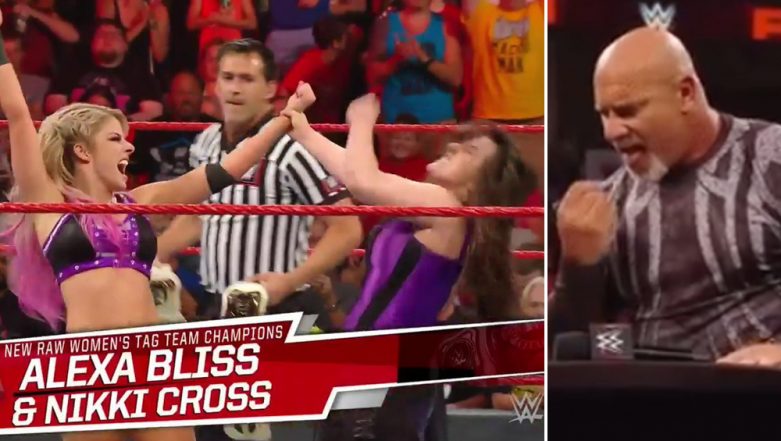 We just witnessed a thrilling episode of Monday Night Raw where unexpected action took place. The spoilers and predictions for WWE Raw Aug 5, 2019, completely failed to an extent as no one expected Goldberg to appear on the show and sign a contract for the match with Dolph Ziggler at SummerSlam 2019. Apart from that we also saw Alexa Bliss and Nikki Cross become the new Raw Women's Tag Team champion. Also, Roman Reign survived from another severe damage as his vehicle got hit by the other car in the parking lot. Let us find out the result supported with a highlight from the last episode of the red brand of WWE. WWE Raw July 29, 2019 Results and Highlights: Brock Lesnar Assaulted Seth Rollins at Backstage; Luke Gallows and Karl Anderson Are the New Tag Team Champions (Check Videos & Pics)

Dolph Ziggler appeared on the 'Miz TV' and insulted Shawn Michael. Heel Ziggler will face The Miz next week on Raw but before that this Sunday at SummerSlam he will have to face the Hall of Famer Goldberg. Goldberg signed the contract for his match with Ziggler at SummerSlam 2019 and said 'You're next'. After that Ziggler got super kicked by Shawn Michaels. WWE SmackDown July 30, 2019 Results and Highlights: Charlotte Flair Challenges Trish Stratus for a Match at SummerSlam 2019 (Watch Videos)

Seth Rollins confronted Brock Lesnar, however, the problem got more worst for him as he again received a brutal beating from the Beast Incarnate. Samoa Joe who has been in the suspect list for attacking Roman Reigns last week on SmackDown tried to prove his innocence throughout the show and when the 'Big Dog' was attacked in the parking lot, the two times United States Champion ran behind the car to find out the culprit. Now the big question arises that if it's not Joe, who must have attacked Reigns again. Ahead of Brock Lesnar vs Seth Rollins WWE Universal Championship Match in SummerSlam 2019, Revisit Beast Incarnate's Record from Past Editions (Watch Video)

Alexa Bliss and Nikki Cross adopted a smart strategy to become the new Tag Team champion by winning the Fatal-4 way match. After the Iconics got eliminated, Alexa and Nikki deliberately kept them away from the battle in the ring and let Mandy Rose and Sonya Deville battle with The Kabuki Warriors. Mandy submitted to Asuka by Bed of Rose submission, but till that time the Kabuki Warriors were fully exhausted, which gave Alexa Bliss and Nikki Cross the opportunity to seal the win and become the new champion.

Guess what, @HEELZiggler... YOU'RE NEXT!@Goldberg RETURNS to the ring THIS SUNDAY at #SummerSlam! #RAW pic.twitter.com/0lFlEW2M19

Roman Reigns Got Hit in the Parking Lot

What the?? A car has just STRUCK @WWERomanReigns' car in the parking lot! #Raw @SamoaJoe pic.twitter.com/6wTj5RFjRS

Apart from the above actions on this past episode of Raw, we saw Andrade defeating Rey Mysterio. The Viking Raiders also won against Jay Alexander & Eric Abraham. With Goldberg facing Dolph Ziggler and Brock Lesnar defending his title against injured Seth Rollins we are all set for an exciting SummerSlam 2019 this Sunday on Aug 11, 2019.