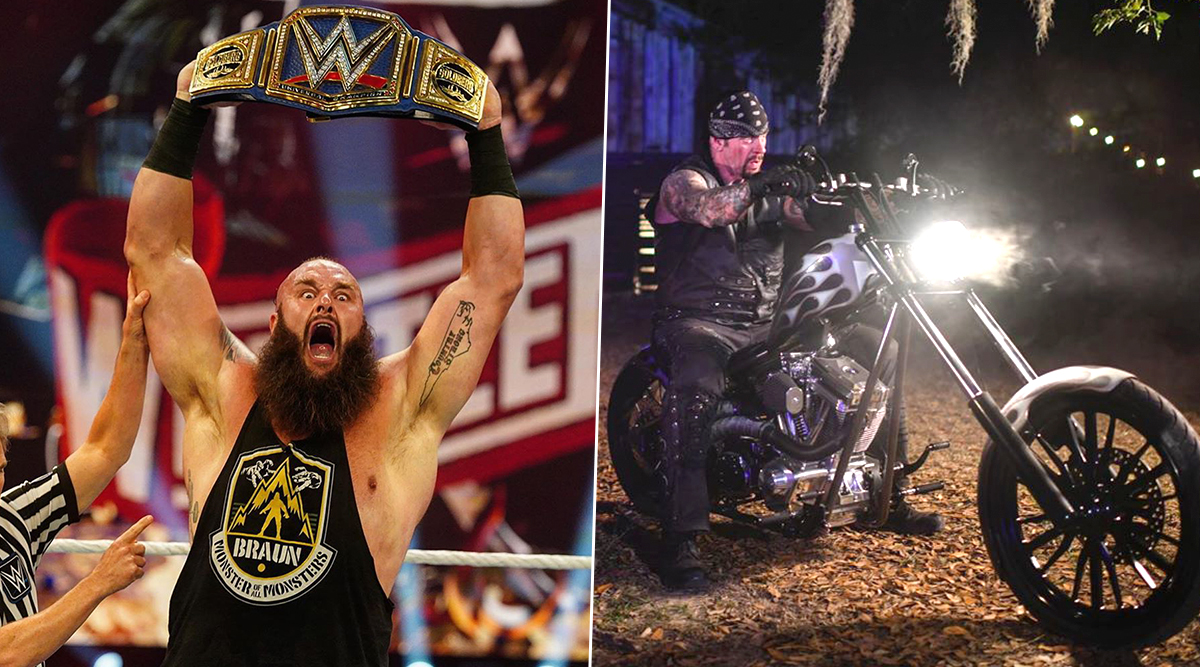 We witnessed a historic night of WWE WrestleMania 36 part 1 on April 4, 2020. WWE lived up to the expectation of fans and managed to put up a good show. The show of shows happened behind closed gates at multiple locations, which included Performance Center in Orlando, Florida as one. Braun Strowman made ample use of the opportunity provided to him at the flagship event. The Monster Among Men became new WWE Universal Champion as he defeated Goldberg. We also witnessed The Undertaker walking out victorious against AJ Styles in first-ever boneyard match. Meanwhile, you have arrived at the right platform, if you are looking for WWE WrestleMania 36 Part 1 results and highlights. WWE SmackDown April 3, 2020 Results and Highlights: ‘The Fiend’ Bray Wyatt Plays Mind Games With His WrestleMania 36 Opponent John Cena (View Pics)

Braun Strowman became no 1 contender for Universal title match against Goldberg at the very last moment. Roman Reigns was pulled out of this match due to coronavirus fear, as he has just recovered from leukemia a year back and his immune might not be strong enough to fight against COVID-19 germs. Braun Strowman survived four spears and a jackhammer by Goldberg in that match. The Monster Among Men delivered four consecutive power slams to Goldberg to become Universal Champion for the first time. We witnessed The Undertaker enter the boneyard in American Badass Style, where the Deadman went over The OC (Luke Gallows and Karl Anderson). Finally, he accomplished the mission by burying AJ Styles in the dirt.

The Miz and John Morrison retain their Tag Team belt as they defeat The New Day and The Usos in the ladder match. Elias gave King Corbin, the taste of his own medicine and successfully ended with a triumph. From women's division, Alexa Bliss and Nikki Cross defeated The Kabuki Warriors to become Women's Tag Team Champion for the second time in their career. Becky Lynch continues to be Raw Women's Champion as she emerges victorious over Shayna Baszler. Kevin Owens proved why he is best in the business as he defeated Seth Rollins in a no disqualification match. WWE Raw March 30, 2020 Results and Highlights: Paul Heyman Guarantees Brock Lesnar Victory Over Drew McIntyre at WrestleMania 36 (View Pics)

@undertaker leaves @ajstylesp1 in the Boneyard to Rest In Peace... #WrestleMania

Glimpse From The Undertaker vs AJ Styles Match

#TheOC walked INTO the boneyard, but they're not walking out. #Undertaker #WrestleMania

Will the numbers game be too much for @bryanldanielson? #WrestleMania

Good news for fans is that, the action is not over yet. WrestleMania 36 part 2 has a lot more to offer with matches like Brock Lesnar vs Drew McIntyre, Edge vs Randy Orton, Charlotte Flair vs Rhea Ripley to name a few. Also, fans will eagerly look forward to John Cena vs 'The Fiend' Bray Wyatt match in Firefly Fun House. Stay tuned with LatestLY for more updates and news from WWE.