Google I/O 2022 To Begin Tonight, Here's How To Watch Live Streaming & What To Expect

Google I/O 2022 event will kick off tonight at 10:30 pm IST. It will take place at the Shoreline Amphitheatre in Mountain View, California. 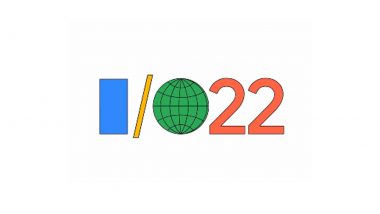 Google I/O 2022 event will kick off tonight at 10:30 pm IST. During the event, Alphabet and Google CEO Sundar Pichai are expected to make several key announcements. Google might announce the launch of new hardware, advancements and improvements that will arrive on Android, WearOS. Google Introduces New Ways to Remove Personal Information from Search Results.

The Google I/O 2022 will take place at the Shoreline Amphitheatre in Mountain View, California. The event will be streamed live via Google's official YouTube and other social media channels. Users can also watch the live telecast of the event here by clicking on the below-embedded video.

It’s all systems go at #GoogleIO. 🔌 Tune in tomorrow at 10am PT for our latest announcements, product demos and more → https://t.co/BJCe4w8BPR pic.twitter.com/C5iaMm1auS

At the Google I/O 2022 event, the company could announce new advancements and improvements in Android 13. The OS received its first developer preview in February this year. The OS might get an Apple-like spatial audio feature for Pixel 6 models and two carrier connections on a single eSIM.

The tech giant might also introduce its Pixel 6a smartphone. The upcoming handset is likely to be powered by Google's Tensor SoC and might come with Pixel 6-like back design. Along with the Pixel 6a, the company could also announce the Pixel Watch. The Pixel Watch is rumoured to feature a circular design and might run on the latest WearOS.

In addition to this, WearOS is said to get an update with a list of improvements. Last year, Google announced its partnership with Samsung to integrate Tizen within WearOS. Moreover, we could also see the launch of Pixel Buds Pro, Google Assistant improvements and more.

(The above story first appeared on LatestLY on May 11, 2022 10:34 AM IST. For more news and updates on politics, world, sports, entertainment and lifestyle, log on to our website latestly.com).