Google is expected to launch the highly awaited Pixel 4 devices somewhere around October which has been teased officially way ahead of the speculated launch. 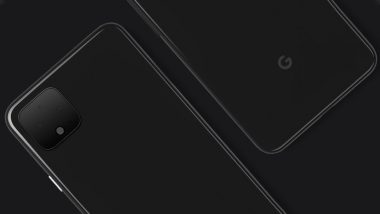 Admist of several rumours, Google went ahead to tease its upcoming Pixel 4 device. To everyone's surprise, the technology giant teased the much awaited Pixel 4 way ahead of its launch that is likely to happen somewhere around October this year. Previously, we reported that live images of Pixel 4XL has emerged on the internet giving a fair bit of idea about the design. We have also seen couple of render images claiming that the phone will sport a square camera bump with two lenses. Now, the official teaser from Google seems to have confirmed the same. Google Pixel 4 XL New Images Leaked Online; Reveals Punch Hole Display.

Going by the image, the camera design clearly shows at least two lenses whereas the third looks more like a sensor along with a LED flash. However, the camera resolutions remains unknown. The overall design layout of the module is very similar to Apple iPhone XI, as per the leaked images.

Well, since there seems to be some interest, here you go! Wait 'til you see what it can do. #Pixel4 pic.twitter.com/RnpTNZXEI1

The image was teased on Twitter via official handle - 'Made By Google' and stated, Well, since there seems to be some interest, here you go! Wait 'til you see what it can do. #Pixel4.

The teaser image also reveals that the upcoming Pixel 4 handset will sport all-glass back design hinting that Google finally will be breaking away from two-tone back finish. The image also shows lack of fingerprint scanner at the back, which could be a hint that we might end up seeing an in-display fingerprint scanner on Pixel 4.

Specification-wise, the company is likely to ditch the notch from the front. Google is expected to employ punch hole camera design similar to the one seen on Samsung S10+ along with dual cameras. Under the hood, the new Pixel 4 devices are likely to be powered by the new generation Snapdragon 855 chipset. However, there is no official word regarding the internal storage and RAM iterations. It is also speculated that the new Pixel devices will run the upcoming Android Q OS out of the box. The tech giant is also speculated to add wirelesa charging feature on the new devices. Lastly, there is no official word from the company regarding the launch event or pricing as of now.

(The above story first appeared on LatestLY on Jun 13, 2019 11:57 AM IST. For more news and updates on politics, world, sports, entertainment and lifestyle, log on to our website latestly.com).