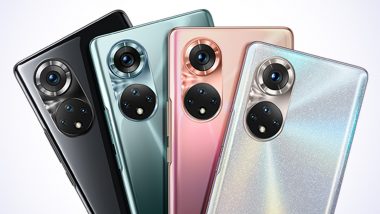 Huawei-owned Honor is all set to launch its Honor 50 Series at an event in China on June 16, 2021. The Honor 50 Series will comprise Honor 50, Honor 50 Pro and Honor 50 Pro+ smartphones. Ahead of its launch, a known tipster has shared an image that reveals the design and colours of the Honor 50 Pro device. As per the image, the phone gets a curved edge display and at the front, there is a pill-shaped cutout at the top left which suggests that it will sport a dual front camera setup. Honor Play 20 With 5,000mAh Battery Launched in China. 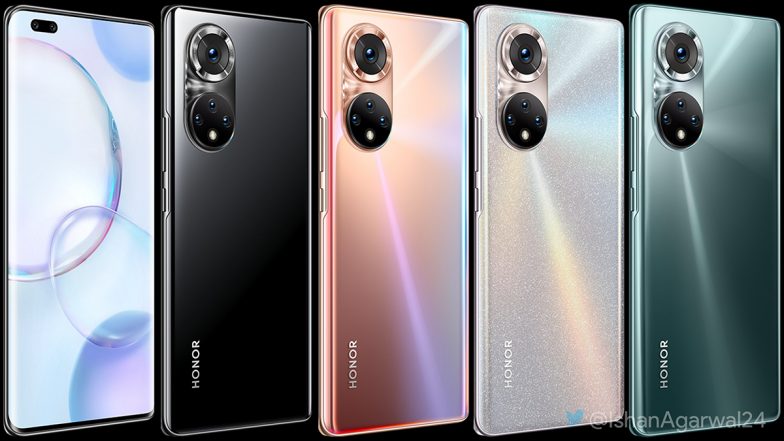 As per the leaked image, Honor 50 Pro's back panel can be seen with two camera rings with the main camera at the top one. The second rings seem to have three camera sensors and an LED flash. Honor 50 Pro is rumoured to sport a 108MP primary lens and two other sensors. In addition to this, the AnTuTu listing has also revealed several specifications of the device. As per the listing, the handset will carry a refresh rate of 120Hz and a resolution of 2676x1236 pixels. The upcoming smartphone could feature a 6.72-inch OLED display which was also offered on the Honor V40 5G phone.

It carries a model number RNA-AN00 and scored 525000 points. The device is expected to be powered by Snapdragon 778G SoC paired with 8GB RAM and 256GB of internal storage. The listing also shows that it will run on Android 11 OS. In addition to this, a report came across 3C certifications which showed that Honor 50 and Honor 5 Pro would come with 66W and 100W fast charging support respectively.

(The above story first appeared on LatestLY on Jun 11, 2021 06:32 PM IST. For more news and updates on politics, world, sports, entertainment and lifestyle, log on to our website latestly.com).