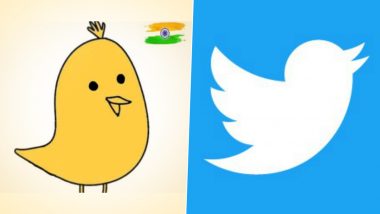 Abuja, June 5: Koo, India's homegrown microblogging platform, is now eyeing opportunities in Nigeria after the country banned microblogging site Twitter indefinitely on Friday. Founded last year, the vernacular micro-blogging platform Koo that was developed in India is now available in Nigeria, Koo co-founder Aprameya Radhakrishna said. Taking to Twitter, Radhakrishna said that Koo, a Twitter lookalike, is available in Nigeria, adding that the platform is keen on making inroads in the Nigerian market.

"@kooindia is available in Nigeria. We're thinking of enabling the local languages there too. What say?" tweeted Radhakrishna. The news of the presence of Koo comes a day after the Nigerian government indefinitely suspended Twitter and accused the US micro-blogging platform of double standards and supporting the secessionists in the west African country.  Twitter Indefinitely Suspended in Nigeria Days After the Microblogging Site Removed President Muhammadu Buhari’s Tweet.

@kooindia is available in Nigeria. We're thinking of enabling the local languages there too. What say? pic.twitter.com/NUia1h0xUi

On Wednesday, the Nigerian government had expressed doubts about Twitter's operations in the country, after it deleted a tweet by President Muhammadu Buhari. The President had made a reference to the country's 30-month civil war in 1967-1970, warning "those who wanted the government to fail" to desist from fomenting trouble.

Koo has over 60 lakh users and had recently raised USD 30 million (about Rs 218 crore) in a funding round led by Tiger Global. Koo, founded by Radhakrishna and Mayank Bidawatka, was launched last year to allow users to express themselves and engage on the platform in Indian languages. It supports multiple languages including Hindi, Telugu and Bengali, among others.

(The above story first appeared on LatestLY on Jun 05, 2021 11:09 PM IST. For more news and updates on politics, world, sports, entertainment and lifestyle, log on to our website latestly.com).