After weeks of leaks and hype, tech giant Microsoft has officially announced the next version of its desktop operating system (OS) -- Windows 11. The new OS will be a free upgrade for Windows 10 users and will start rolling out "this holiday". 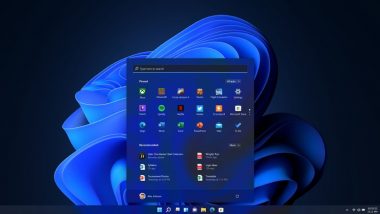 San Francisco: After weeks of leaks and hype, tech giant Microsoft has officially announced the next version of its desktop operating system (OS) -- Windows 11. The new OS will be a free upgrade for Windows 10 users and will start rolling out "this holiday". Microsoft Windows 11 OS Launched With New Start Menu, Android Apps Integration & More, Check Details Here.

"We have simplified the design and user experience to empower your productivity and inspire your creativity. It's modern, fresh, clean and beautiful," Panos Panay, Chief Product Officer, Windows + Devices, said in a statement. "From the new Start button and taskbar to each sound, font and icon, everything was done intentionally to put you in control and bring a sense of calm and ease," Panay added.

Today marks the beginning of a new generation of Windows. With Windows 11, we’re reimagining everything from the operating system to the store, to unlock new opportunity for people and the world. https://t.co/IuMxrS262d

New in Windows 11, the company is introducing Snap Layouts, Snap Groups and Desktops to provide an even more powerful way to multitask and stay on top. These are new features designed to help users organise their windows and optimise their screen real estate. Users can also create separate Desktops for each part of life and customise them according to their likes -- imagine having a Desktop for work, gaming or school.

According to the company, Windows 11 is made for gamers as it unlocks the full potential of the system's hardware, putting some of the latest gaming technology to work. With a high performance NVMe SSD and the proper drivers, Windows 11 can soon load new games faster than ever thanks to a breakthrough technology called DirectStorage, which we also pioneered as part of the Xbox Velocity Architecture featured in the Xbox Series X and Xbox Series A, the company said.

Windows 11 also gives you a more natural way to connect with friends and family through Teams, allowing users to instantly mute and unmute, or start presenting directly from the taskbar, it added. "Not only will we bring you more apps than ever before, but we're also making all content -- apps, games, shows, movies -- easier to search for and discover with curated stories and collections," the company said.

The company introduced Chat from Microsoft Teams integrated into the taskbar. With this, users can instantly connect through text, chat, voice or video with all of their personal contacts, anywhere, no matter the platform or device they're on, across Windows, Android or iOS. The new Microsoft Store is rebuilt for speed and with an all-new design that is beautiful and simple to use, said the statement.

(The above story first appeared on LatestLY on Jun 25, 2021 11:32 AM IST. For more news and updates on politics, world, sports, entertainment and lifestyle, log on to our website latestly.com).