The Narzo series was earlier scheduled to launch in March. However, due to the nationwide lockdown, the launch event was postponed indefinitely. 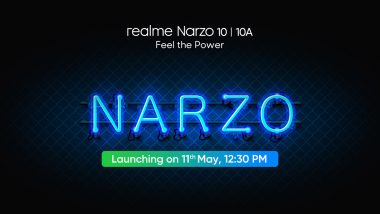 New Delhi, May 7: Chinese smartphone manufacturer Realme on Thursday announced to launch its much-anticipated Narzo smartphone series on May 11. The company said it will host an online event which will be streamed via Realme's YouTube channel as well as its social media platforms. As e-commerce deliveries for non-essential products began slowly, Realme earlier confirmed to launch the new smartphone in India soon. Realme Commences Online Orders of Its Smartphones; Gets Huge Orders.

"I have been seeing in my comments that all of you are eagerly waiting for #realmeNarzo series to be launched. Happy to share that we are launching it on 11th May at 12:30PM," tweeted Realme India CEO Madhav Sheth.

The Narzo series was earlier scheduled to launch in March. However, due to the nationwide lockdown, the launch event was postponed indefinitely. The new series will have two smartphones - the Narzo 10 and the Narzo 10A amd they are speculated to be positioned in the mid-range and budget price segments, respectively. Realme Narzo 10 Series India Launch Gets Delayed Again.

In terms of specifications, the Realme Narzo 10 is expected to come with a quad-camera setup at the back while the Narzo 10A will feature a triple-camera module. The smartphones are expected to feature a 6.5-inch display and will be backed by a huge 5,000mAh battery.

(The above story first appeared on LatestLY on May 07, 2020 12:52 PM IST. For more news and updates on politics, world, sports, entertainment and lifestyle, log on to our website latestly.com).