The Realme Narzo 50A Prime, which was recently launched in the Indian market, will go on sale tomorrow in India at 12 pm IST. The phone comes in two variants - 4GB + 64GB and 4GB + 128GB. 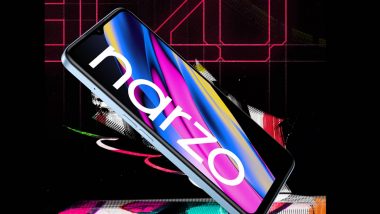 The Realme Narzo 50A Prime smartphone was recently launched in the Indian market with a starting price of Rs 11,499. The budget smartphone will be made available for online sale tomorrow at noon via Amazon.in and the official website. The phone comes in two variants - 4GB + 64GB and 4GB + 128GB. While the former is priced at Rs 11,499, the latter has a price tag of Rs 12,499. The phone comes in two shades - Flash Black and Flash Blue. Realme Narzo 50A Prime With 50MP Triple Rear Cameras Launched in India.

As far as specs are concerned, the Realme Narzo 50A Prime gets a 6.6-inch FHD+ LCD panel with a standard 60Hz refresh rate. Under the hood, there is an octa-core Unisoc T612 chipset coupled with 4GB of RAM and up to 128GB of internal storage.

The #realmenarzo50APrime goes on sale tomorrow! How excited are you about this?#MassivePowerMightyPerformance

For photos and videos, the phone sports a triple rear camera unit. It consists of a 50MP primary lens accompanied by a secondary monochrome sensor, and a macro lens. The front camera is an 8MP snapper for selfies and videos. The phone packs a 5,000mAh battery paired with 18W fast charging.

(The above story first appeared on LatestLY on Apr 27, 2022 11:08 PM IST. For more news and updates on politics, world, sports, entertainment and lifestyle, log on to our website latestly.com).