Realme X9 smartphone has been reportedly spotted on the official India website. Realme X9 phone will be launched under the Realme X9 Series. 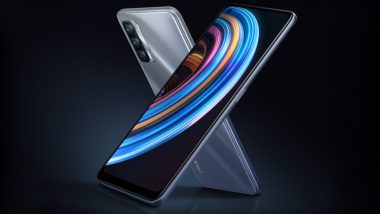 The device was seen along with the Realme 9, and upcoming devices like Realme XT 3 and Realme GT 2. As per the leaked details, Realme X9 is likely to feature an AMOLED display and will come powered by Qualcomm Snapdragon 778G SoC. The device could carry a high refresh rate as well. Apart from this nothing much is unknown about Realme X9.

Realme X9's elder sibling Realme X9 Pro was recently spotted on the Weibo website with prices and several specifications. Realme X9 Pro will flaunt a Samsung E3 AMOLED screen with a refresh rate of 120Hz. It is said to be powered by a Qualcomm Snapdragon 870 chipset with up to 12GB of RAM and 256GB of internal storage. For optics, it will come with a 50MP main camera, a 16MP ultra-wide-angle lens and a 2MP B&W shooter.

(The above story first appeared on LatestLY on Jun 15, 2021 05:30 PM IST. For more news and updates on politics, world, sports, entertainment and lifestyle, log on to our website latestly.com).