Samsung Display and chip-maker Intel have created the world's first 17-inch slidable display for PCs that slides seamlessly, not unfolds, in your hands. 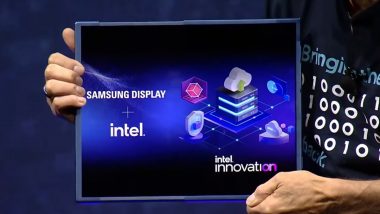 "We're announcing the world's first 17-inch slidable display for PCs. This device will satisfy various needs for a larger screen and portability as well," Choi said at the event late on Tuesday.

The device turns a 13-inch tablet into a 17-inch monitor with a flexible display and a sliding mechanism. The companies were yet to reveal when this slidable PC will become available in the market. Intel also showcased an array of new hardware, software and services aimed at helping its broad ecosystem of developers overcome challenges and deliver new generations of innovation.

Check out this amazing 17” slidable display that @SamsungDisplay CEO Joo-Sun Choi just introduced at Intel Innovation 2022! With its large, variable screen size and portability it opens up a world of possibilities for everyone. 👀🆕☀ #IntelON pic.twitter.com/D9RQ8Lyux2

"It is now rolling out to existing games through updates and will be available in more than 20 titles this year. The XeSS software developer kit is also now available on GitHub," said Intel.

It will come to new laptops starting later this year. The company also announced XeSS, or Xe Super Sampling, a gaming performance accelerator that works across Intel discrete and integrated graphics.

(The above story first appeared on LatestLY on Sep 28, 2022 11:05 AM IST. For more news and updates on politics, world, sports, entertainment and lifestyle, log on to our website latestly.com).