Eight Asiatic Lions at Hyderabad’s Nehru Zoological Park Test Positive for COVID-19: From Minks, Cats to Dogs, Here Is What We Know About Coronavirus in Animals

Researchers are not extremely worried about the spread of the disease in farm animals, as they can be watched and contained and cordoned off in a specific area. However, the same cannot be said with wild animals. 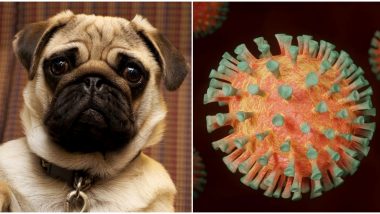 On Tuesday, Eight Asiatic lions at Hyderabad’s Nehru Zoological Park testing positive for coronavirus ( COVID-19). Scientists are uncertain if the animals contracted the virus through humans. The uncertainty surrounding the infection has led to speculation humans susceptibility to contracting the disease from the animals. However, The Centre for Disease Control and Prevention say that it is unlikely that humans can get infected by animals with  COVID-19

Ever since coronavirus wielded a deadly attack around the world, scientists have kept a vigilant watch over the spread of the virus. They appear to be troubled by the possibility the virus might lie dormant in animals and then mutate and resurface in humans. If the theory holds any scientific bearing, we might never get out of the rinse and repeat the cycle of the pandemic.

While there is precedence that coronavirus that infects animals can infect people, for instance, SARS-CoV-2 in bats that originated in Wuhan likely, infected people. However, this is considered an anomaly and since then there has been no empirical proof that any human has been infected by animals. However, the future is uncertain.

The CDC contend that there is a high probability that the animals like cats and dogs, big cats in zoos or sanctuaries, gorillas in zoos, can contract the virus from humans. The first case of an infected animal was reported in March 2020 in Hong Kong. A 17-year-old Pomeranian in Hong Kong was infected by his keeper who was tested positive for the virus.

Subsequently, two days later, a second dog was infected with the virus in Hing Kong. It was reported that none of the staff handling the dogs was tested positive for the disease.

Researchers are not extremely worried about the spread of the disease in farm animals, as they can be watched and contained and cordoned off in a specific area. However, the same cannot be said with wild animals. In December 2020, a wild mink in Utah in the United States of America was tested positive for the virus. This has given researchers some pause since no wild and seemingly free animal had ever been tested positive for the virus. The CDC has reported that Minks can spread the virus in Humans. While there is no credible evidence that they play a significant role in this particular leap, there have been reports of humans contracting the virus from minks in the Netherlands, Denmark, and Poland, and new data suggest it might have occurred in the United States. According to the CDC, there have been reports of Minks in farms infecting the humans in their vicinity.

Here’s the thing, while researchers around the world might disagree with the various assessments made by their peers, and all the theories in spreading have so far been deemed insubstantial, they all seemingly agree that this virus is unpredictable. It’s always changing, morphing, mutating and might strike anyone or anything at any given moment. So the only thing that we can do is adhere to the norms set by the CDC and the WHO. Stay in, stay safe, stay vigilant, always wear your mask while venturing out until the world has been inoculated against the disease.

(The above story first appeared on LatestLY on May 04, 2021 08:22 PM IST. For more news and updates on politics, world, sports, entertainment and lifestyle, log on to our website latestly.com).