The Indian Space Research Organisation (ISRO) is all set to launch 19 satellites, including a Brazilian satellite Amazonia-1, tomorrow. 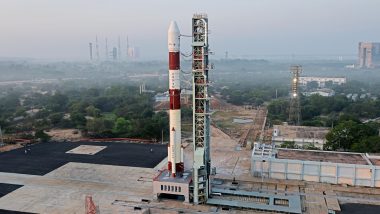 Chennai, February 27: The Indian Space Research Organisation (ISRO) is all set to launch 19 satellites, including a Brazilian satellite Amazonia-1, from Satish Dhawan Space Centre (SDSC) in Sriharikota in Andhra Pradesh tomorrow. The countdown for the launch of Polar Satellite Launch Vehicle (PSLV) rocket carrying 19 satellites began at 8:54 am today. This will be the ISRO's first launch mission of 2021. GISAT-1: ISRO Lining Up Launch of India's Geo Imaging Satellite on February 28.

"Countdown for the launch of #PSLVC51/Amazonia-1 mission commenced today at 0854Hrs (IST) from Satish Dhawan Space Centre (SDSC) SHAR, Sriharikota. Launch is scheduled tomorrow at 1024 Hrs IST," ISRO tweeted. This mission, involving PSLV rocket numbered PSLV-C51, is one of longest ones. Here are key details about the mission. Tapan Misra, Top ISRO Scientist, Claims He Was Poisoned with Deadly Arsenic Trioxide Mixed in Chutney Along with Dosa.

This mission is one of the longest for a PSLV rocket is expected to conclude 1 hour, 55 minutes and 7 seconds into its flight. If the Sunday's launch becomes successful, India would have sent a total of 342 foreign satellites into space, all for a fee.

(The above story first appeared on LatestLY on Feb 27, 2021 11:24 AM IST. For more news and updates on politics, world, sports, entertainment and lifestyle, log on to our website latestly.com).