Sundar Pichai-run Google has launched a scathing attack on Microsoft, accusing the Satya Nadella-run enterprise of willing to break the way the open web works in an effort to undercut a rival. 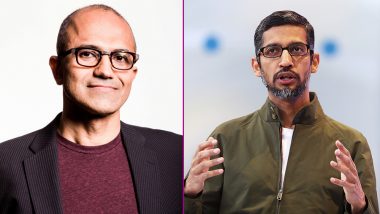 San Francisco, March 13: Sundar Pichai-run Google has launched a scathing attack on Microsoft, accusing the Satya Nadella-run enterprise of willing to break the way the open web works in an effort to undercut a rival.

The attack came as Microsoft President Brad Smith, who on Friday issued a testimony for the House Committee on the Judiciary looking into antitrust and commercial aspects of competition for a free and diverse press, and slammed Google for hampering the growth of news organisations.

"News organisations have ad inventory to sell, but they can no longer sell directly to those who want to place ads," Smith said in a statement.

"Instead, for all practical purposes they must use Google's tools, operate on Google's ad exchanges, contribute data to Google's operations, and pay Google money. All this impacts the ability of news organisations to benefit economically even from advertising on their own sites," Smith noted.

"It's no coincidence that Microsoft's newfound interest in attacking us comes on the heels of the SolarWinds attack and at a moment when they've allowed tens of thousands of their customers to be actively hacked via major Microsoft vulnerabilities," Walker said in a statement.

"They are now making self-serving claims and are even willing to break the way the open web works in an effort to undercut a rival. And their claims about our business and how we work with news publishers are just plain wrong," he added.

Google and Microsoft are at odds over whether publishers should have more control over a digital ad industry dominated by the search giant and Facebook.

In January, Google threatened to remove its search engine from Australia in response to the News Media Bargaining Code that would force the company to pay news publishers for their content.

Australia passed the law last month and Microsoft are out in full support of the law, slamming both Google and Facebook.

Walker said that Microsoft is the second-largest company in the US but "their track record is spotty".

"They have paid out a much smaller amount to the news industry than we have. And given the chance to support or fund their own journalists, Microsoft replaced them with AI bots," he argued.

"Microsoft's attempts at distraction aside, we'll continue to collaborate with news organisations and policymakers around the world to enable a strong future for journalism".

On Friday, a House Judiciary subcommittee hearing focused on the way Google and Facebook distribute news, and a new bill introduced earlier this week has already found Republican support. It's one of the biggest legislative threats to tech that's come out of the years-long antitrust debate, and much of its political force comes from the precarious state of local journalism.

"The crisis in American journalism has become a real crisis in our democracy and civic life," Cicilline said in his opening remarks Friday.

The fight between two tech giants came as the US is debating a new bill, introduced earlier this week, that would allow news organisations to collectively negotiate with platforms like Facebook and Google the terms in which their content is distributed online.

(The above story first appeared on LatestLY on Mar 13, 2021 12:33 PM IST. For more news and updates on politics, world, sports, entertainment and lifestyle, log on to our website latestly.com).