As 'TikTok Pro' download link is widely circulated, the Maharashtra cyber cell has issued a warning, calling this a malware. 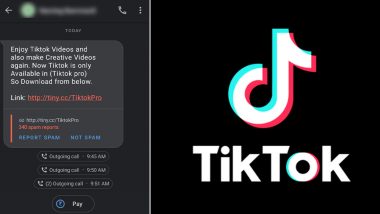 Mumbai, July 9: After India banned 59 Chinese apps including TikTok, a namesake app of the popular video-sharing application has appeared online. A message carrying download link of 'TikTok Pro' app is going viral on WhatsApp with people believing the application as an alternative to original TikTok. As 'TikTok Pro' download link is widely circulated, the Maharashtra cyber cell has issued a warning, calling this a malware. Facebook, Instagram, TikTok, PUBG, Tinder Among 89 Apps Banned by Indian Army; Full List Here.

"Miscreants are now taking advantage of the popularity of TikTok by promoting a malware under its name and are calling this new app TikTok Pro, claiming it to be an alternative to the banned TikTok app. Cybercriminals are sending messages on various social media platforms to download the same for external links," read a recent statement issued by the Maharashtra cyber cell. It appears the 'TikTok Pro' app link downloads malware to user devices, which then works in the background to steal user data. 59 Banned Chinese Apps Go Off Google Play, Apple App Store in India.

Netizens who downloaded 'TikTok Pro' reported on Twitter that the app took permission for accessing phone camera and microphone, but did not have any feature to make use of these and seemed to be completely non-functional. "The fake malware app, appears just as the original TikTok app and requests permission for camera, image gallery, mic and others among few, stealing sensitive information from your phone," the Maharashtra cyber cell said.

Citizens are requested to be aware of the new TikTok scam happening under the name of a malware app 'TikTok Pro'@DGPMaharashtra @CyberDost #CyberSafety #CyberSecurity pic.twitter.com/KqWk70KhbV

Days after a violent face-off between troops of India and China in Galwan valley on June 15 when 20 Indian soldiers were martyred, India banned 59 Chinese apps including TikTok to counter the threat posed by these applications to the country's "sovereignty and security".

(The above story first appeared on LatestLY on Jul 09, 2020 04:10 PM IST. For more news and updates on politics, world, sports, entertainment and lifestyle, log on to our website latestly.com).