What is Tooter App? The Indian 'Clone' of Twitter is Getting a Hilarious Welcome by Curious Twitterati With Funny Memes and Jokes

A new social media platform named Tooter is gaining popularity these days in India for being "Swadeshi Social Network". It is an open-source social networking site. On the introductory page of Tooter is written, "Swadeshi Andolan 2.0". 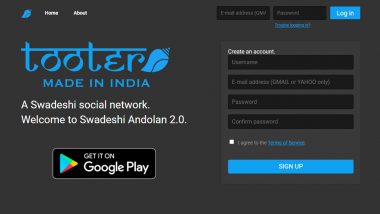 New Delhi, November 24: Recently, a new social media platform named Tooter is getting a lot of traction. Tooter is gaining popularity in India for being "Swadeshi Social Network". It is an open-source social networking site. As the name suggests, Tooter is conceptualised on the lines of Twitter. Its interface has a blue and white colour scheme, which is considered to be a mix of Facebook and Twitter. Tooter is forked or derived from the Mastodon project. Twitterati shared funny memes about the new social media platform.

Many famous personalities, including Prime Minister Narendra Modi, Bollywood superstar Shah Rukh Khan, Indian Cricket Captain Virat Kohli and Even BJP have accounts on Twitter. However, these personalities have not mentioned anything about opening an account on Tooter. Secondly, their Tooter feed is the same as that of Twitter. It seems that the feed on Tooter has been sourced from Twitter. Parler App Becomes The Most Downloaded App in a Day in the US; Get to Know More About Twitter's Look-alike App.

Here Are Some of The Funny Memes:

#Tooter is new app for do tweets !

Team Tooter having an intense brainstorming session on its UI/UX. #Tooter pic.twitter.com/Zj4E4Sexqe

According to reports, Tooter was created in June this year. It has a blue ‘conch’ as its symbol. One can create the account on Tooter by using an email id. Once the account is created on Tooter, you would be followed by a bot account called "News" and the account of its CEO (@Nanda). The Tooter App is available on Google Play Store, but not on the App Store for iOS devices.

Originally forked from the Mastodon project, Tooter's codebase is free and open-source, licensed under the GNU Affero General Public License version 3 (AGPL3). As stated on the About section, the user, have a choice when using Tooter: one can either have an account on Tooter.in, or, if he/she doesn't like what we're doing on Tooter.in or simply want to manage your own experience, one can spin up your own Tooter server that you control, that allows you to communicate with millions of users on their own federated servers from around the world, including users on Tooter.

The complete source code of Tooter can be downloaded from GitLab. Tooter is created on the lines of Parler app. It is a US-based social media platform popular with supporters of Donald Trump. The Parler app was created in 2018 to create "free-speech".

(The above story first appeared on LatestLY on Nov 24, 2020 11:20 PM IST. For more news and updates on politics, world, sports, entertainment and lifestyle, log on to our website latestly.com).