Users need to update WhatsApp version to the 2.18.301 Android beta update to use the new PiP mode. 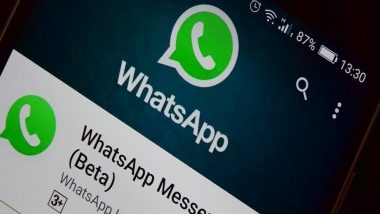 San Francisco, October 3: WhatsApp on Wednesday started rolling out "Picture in Picture (PiP) mode" for viewing videos hosted on selected platforms, for all Android beta users running Android operating system (OS version 4.4 and above). According to WABetaInfo, a fan website that tracks WhatsApp, the PiP feature is being introduced for all Android beta users that would allow users to play videos hosted on platforms such as YouTube, Facebook, Instagram and Streamable right within WhatsApp. PiP is a special type of multi-window mode mostly used for video playback. It lets the user watch a video in a small window pinned to a corner of the screen while navigating between apps or browsing content on the main screen. WhatsApp Rolls Out New Group Video Calling Feature Update for Android and iOS.

"Read later to discover if the feature is already enabled for you and please report us on Twitter if it correctly works. "If you have already updated but you don't see the feature, please back up your chat history and reinstall WhatsApp if you don't want to wait more," WABetaInfo said.

Users need to update WhatsApp version to the 2.18.301 Android beta update to use the new PiP mode. WhatsApp has already implemented the feature on its iOS app and it is expected to be introduced for all Android users soon. The PiP feature was rolled out in January for iOS users. The Facebook-owned company has over 200 million monthly active users in India and is one of the most popular mobile apps worldwide. WhatsApp Now Gets ‘Dismiss as Admin’ Feature; Rolled out on iOS & Android.

(The above story first appeared on LatestLY on Oct 03, 2018 06:56 PM IST. For more news and updates on politics, world, sports, entertainment and lifestyle, log on to our website latestly.com).