WhatsApp Says Pegasus Attack Was Successful on 20 Users in India

At least 121 WhatsApp users in India were targetted by unknown operators using Israeli spyware Pegasus and the attack was successful on 20 of them, the Facebook-owned messaging platform said. 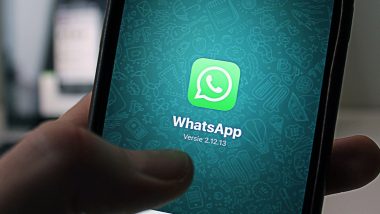 New Delhi, November 23: At least 121 WhatsApp users in India were targetted by unknown operators using Israeli spyware Pegasus and the attack was successful on 20 of them, the Facebook-owned messaging platform has told the government. WhatsApp, however, could not reveal what data, if any, was accessed on the devices of those who were targetted by spyware Pegasus. The attack was of a high order of complexity and sophistication, it said. WhatsApp May Work on Multiple Devices at Same Time Soon: Report.

In a lawsuit filed last month in a US federal court in San Francisco, WhatsApp said that Indian journalists and human rights activists were among those globally spied upon by unnamed entities using Pegasus spyware. According to WhatsApp, the spyware was developed by Israel-based NSO Group and had been used to snoop on about 1,400 users globally, including 121 users from India. WhatsApp has over 400 million users in India.

In its lawsuit, the messaging app alleged that the NSO Group and Q Cyber Technologies violated US and California laws as well as WhatsApp’s terms of service. In response to a question in the Lok Sabha on Wednesday, IT Minister Ravi Shankar Prasad said that Cybersecurity agency CERT-In has issued a notice to WhatsApp seeking details on targeting of mobile phones of Indian citizens by Israeli spyware Pegasus.

Developed by NSO Group, an Israeli firm, Pegasus is spyware that can read text messages, track calls, collect passwords, trace location and access video camera of devices running certain versions of iOS, Apple's mobile operating system. It was discovered in 2016. After installation on an iPhone, Pegasus can gather information from apps such as iMessage, Gmail, Viber, Facebook, WhatsApp, Telegram, and Skype.

(The above story first appeared on LatestLY on Nov 23, 2019 09:10 AM IST. For more news and updates on politics, world, sports, entertainment and lifestyle, log on to our website latestly.com).