Several other applications provide a variety of stickers which can be used on WhatsApp. Apple is deleting all such apps from the App Store. 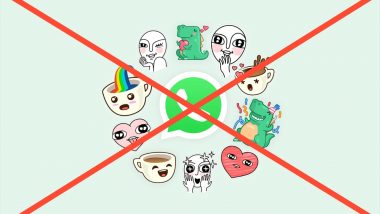 No third-party sticker apps will be allowed on iOS. (Photo credits: File Image)

Widely used messaging application WhatsApp introduced the much-awaited stickers feature recently. Other than emojis and GIFs, Whatsapp added sticker packs to it, which one can use in their conversations. WhatsApp stickers was a feature that was expected to come much earlier since a few other messaging applications had already introduced the stickers. Now the stickers feature is available for all Android and iOS users. But Apple users may have some issue in using these stickers if they are using other sticker apps that are available on both Google Play Store and App Store. Apple is deleting all WhatsApp sticker apps since they violate rules. WhatsApp Stickers Pack Apps Free Download: Check Top Android Stickers Packs.

The stickers feature on WhatsApp is a big hit and people were eagerly waiting for it to roll out. The application had announced the new feature months ago, and after the first Beta testing, it is now available to everyone. Since then there are several other applications which provide a variety of stickers which can be used on WhatsApp. Apple is deleting all such apps from the App Store as it asks the user to install WhatsApp. According to the company, no app should ask the user to install another application for its functioning. WhatsApp Stickers Update: Here’s How You Can Convert Photos into Stickers on Android Phone.

Apple is reporting that all WhatsApp Stickers are violating their guidelines. The main reasons:

1) There are too much apps with similar behavior.

2) It requires WA to be installed. Apps should not require another apps.

3) The design of these apps is the same. https://t.co/L86KCYeSBV

So if you want to use WhatsApp stickers you will have to do with the ones that are provided through Facebook. If you are looking for other sticker packs, third-party apps will not be allowed for iOS. Then looks like, WhatsApp will need some design change which does not permit any third-party app for stickers in the first place.

(The above story first appeared on LatestLY on Nov 18, 2018 04:39 PM IST. For more news and updates on politics, world, sports, entertainment and lifestyle, log on to our website latestly.com).