India has over 400 million WhatsApp users. Facebook-owned messaging platform is asking users to crop any video longer than 15 seconds time duration and only then it can be posted as Status. 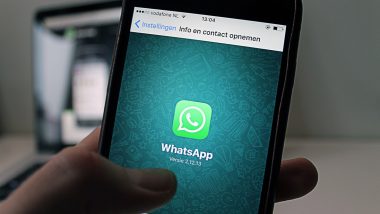 New Delhi, March 30: Facebook-owned WhatsApp has reduced the Status video limit from 30 seconds to 15 seconds in India to cut strain on Internet networks during the coronavirus lockdown in the country as millions of people have started sharing videos in Status. A tweet by WABetaInfo has revealed WhatsApp has put a bar on time limit for videos posted under the ‘Status' section of the Facebook-owned instant messaging app. Delhi Police Issues WhatsApp Numbers for Newspaper Hawkers.

"You can no longer send videos to WhatsApp Status if they are longer than 16 seconds: only videos having a duration of 15 seconds will be allowed. This is happening in India and it's probably an initiative to reduce the traffic on the server infrastructures," WABetaInfo tweeted on Sunday.

India has over 400 million WhatsApp users. Facebook-owned messaging platform is asking users to crop any video longer than 15 seconds time duration and only then it can be posted as Status. At the time of launch, WhatsApp allowed 90 seconds to three minutes of video and if the existing video is larger than 16MB if gave an option to trim the length of the video before sending it. Later, the limit was reduced to 30 seconds. WhatsApp has seen a 40 per cent increase in usage globally, according to a study by Kantar, a data and consulting company.

(The above story first appeared on LatestLY on Mar 30, 2020 12:28 PM IST. For more news and updates on politics, world, sports, entertainment and lifestyle, log on to our website latestly.com).