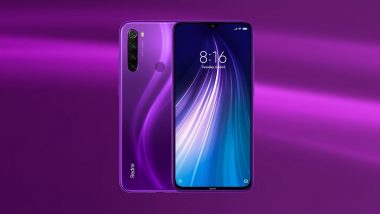 Xiaomi's affordable smartphone - Redmi Note 8 has become costlier in India. According to the latest reports, the Chinese smartphone brand has officially revised the prices of the smartphone. This revision is specifically applicable for the 4GB + 64GB variant. As a reminder, the company hiked the prices for the Redmi Note 8 last month itself. The new price is now reflecting on the official website. Introduced as a successor to the Redmi Note 7, the smartphone competes against the likes of Realme Narzo 10 and Samsung Galaxy M11. Redmi Note 9 Smartphone to Be Launched in India Soon, Check Teaser.

With the new prices coming into effect, the Redmi Note 8 now retails at Rs 12,499 instead of Rs 11,999. This price is for the entry-level variant with a configuration of 4GB RAM & 64GB onboard storage. As compared to the last month, the price has been revised by 500 increase. But, it shows a difference of Rs 2,500 from the launch price as the smartphone was launched at Rs 9,999.

The smartphone runs on the latest version of the Android, based on MIUI 11. The phone comes equipped with a 6.39-inch FHD+ display with a resolution of 1080x2280 pixels. The phone is powered by an octa-core chipset from Qualcomm, which is a Snapdragon 665 SoC. The processor is mated up to 6GB of RAM and up to 128GB of onboard storage. The internal storage on the device is expandable up to 512GB via microSD card.

For photography, the smartphone gets a quad rear camera module at the back which comprises of a 48MP primary snapper with f/1.79 lens and an 8MP ultra-wide-lens. The other two snappers are 2MP lens macro lens and depth sensors. At the front, there is a 13MP camera for video calls and selfies. The phone is backed by a 4,000 mAh battery supporting 18W fast charging.

(The above story first appeared on LatestLY on Jul 12, 2020 05:51 PM IST. For more news and updates on politics, world, sports, entertainment and lifestyle, log on to our website latestly.com).