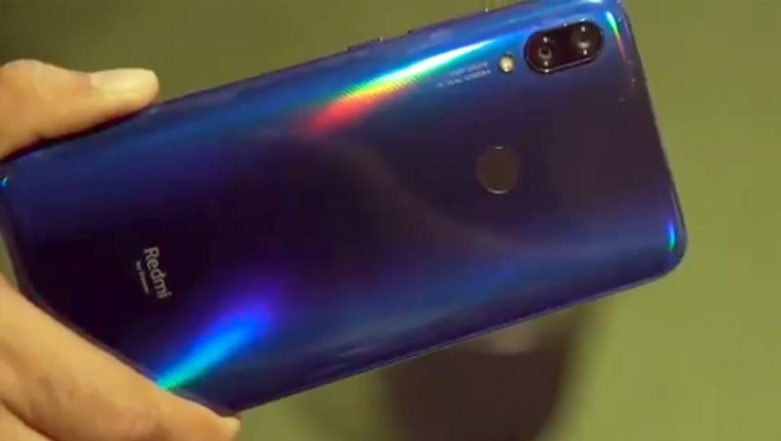 Xiaomi, the Chinese smartphone brand is all set to launch two new smartphones in the country today. The phone maker has already confirmed that it will be introducing Redmi Y3 and Redmi 7 devices in India on April 24, which is today. Talking about the Redmi 7, the phone is already available in the China market and we already known the specifications and features of the device. On the other hand, Redmi Y3 will be India-specific product with a 32MP lens, which has been confirmed by the brand itself. Xiaomi Redmi Y3 With 32MP Selfie Camera Scheduled To Launch in India on April 24.

Xiaomi's Redmi Y-Series smartphones are all about selfie camera experience and the upcoming Redmi Y3 phone will be no different. However, the new Redmi Y3 is likely to be a major upgrade over its predecessor. The phone will feature a 32MP selfie camera as well as a waterdrop notched screen, which we have seen on several devices launched during the year 2019. A new short video was revealed by the company on Twitter wherein the device was thrown in a bin and later on pushed on staircase. The video underlined phone's durable build and its ability to survive accidental drops.

Mi fans, am in Delhi for #RedmiY3 launch that'll start at 12 noon today! RT if you're excited about the #32MP selfie superstar 😍#Xiaomi ❤️ pic.twitter.com/lRpwq1Q4DS

On the other hand, the Redmi 7 will sport a 6.26-inch HD+ IPS LCD screen with a waterdrop notch that houses a 32MP selfie camera. The phone looks pretty similar to the Redmi Note 7 Pro, but comes with a plastic body instead of glass. Under the skin, there will be Snapdragon 632 SoC from Qualcomm that will be clubbed with up to 3GB of RAM and up to 64GB of internal space. The phone could be offered in three storage configurations - 2GB RAM + 16GB ROM, 2GB RAM + 32GB ROM and 3GB RAM + 64GB ROM. OnePlus 7 Flagship Series To Be Launched on 14th May 2019; Prices, Features, Specifications & Other Details.

How about the build quality? See it for yourself. Will you drop your phone like that? #32MPSuperSelfie arriving on 24-04-2019. pic.twitter.com/rYOguJazj3

On the optics front, the new Redmi 7 will sport a dual camera module at the rear which could comprise of 12MP primary sensor and a 2MP secondary shooter. Moreover, the phone will be carrying an 8MP sensor upfront for video calling and selfies. To be backed by a 4,000 mAh battery, the phone will also be equipped with a fingerprint sensor and face unlock.