American Killed by Sentinelese Tribe on Andaman Island Was Christian Missionary; All About John Allen Chau's Entry Into Restricted Island 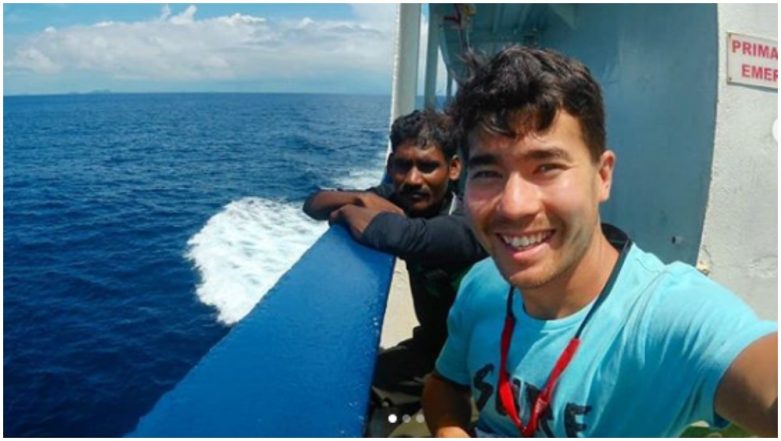 American tourist John Allen Chau who was killed by a protected Sentinelese tribe in Andaman and Nicobar island was a Christian missionary. The 27-year-old had gone to the island to preach Christianity to people who live secluded from the rest of the world. As it was difficult to get to the island, Chau took help from the local fishermen who paddled him to North Sentinel evading patrolling teams of police, Coast Guard and Navy. And in return, he paid them Rs 25,000 to take him off-limits in his kayak. However, people of the tribe were not pleased by Chau's arrival and killed him.

After reaching the island on November 15, he tried to lure them with a football and fish, but they shot him with an arrow that hit his Bible. Following the unwelcoming encounter, Chau returned to his boat and fled. That night, he wrote about his encounter in a journal and gave it to the fishermen. Trying his luck the next day, he went back to the tribals on November 16. Naval Officer Lt Commander Neeraj Kumar Found Dead at INS Kardip, Andaman & Nicobar Islands.

Chau had fixed a place where he would meet his helpers but he did not return. Later the fishermen watched from a distance as the tribesmen dragged Chau's body away and buried it. Dependra Pathak, DGP, Andaman and Nicobar Police, in a press release issued on Wednesday said, "In the morning of November 17, they saw a dead person being buried at the shore which from the silhouette of the body, clothing and circumstances appeared to be the body of Chau."

DGP Pathak said that Chau conducted the expedition with the help of "local electronics engineer Alexander and a water sports service provider and hired five fishermen".He added that access to North Sentinel Island and its buffer zone is strictly restricted under the Protection of Aboriginal Tribe (Regulation), 1956 and Regulations under Indian Forest Act, 1927. Seven people have been arrested for violating the provisions of the PAT Regulation and causing the death of Chau.

Following the incident, the fishermen returned to Port Blair and narrated the story to Alexander and handed him Chau's journal. Then Alexander informed Bobby Parks, Chau's friend in the USA, who in turn informed his mother. On learning about her son, she alerted the US Consulate which informed the police on November 19. Pages of the journal which were obtained by Daily Mail read, "You guys might think I'm crazy in all this but I think it's worth it to declare Jesus to these people. Please do not be angry at them or at God if I get killed."

US Embassy was quoted as saying, "We are aware of reports concerning a US citizen in the Andaman and Nicobar Islands. The welfare and safety of US citizens abroad are one of the highest priorities of the US Department of State."

North Sentinel Island is one of the Andaman Islands in the Bay of Bengal. The natives speak an unknown language and have rejected any contact from the outside world. The Sentinelese people are among those tribes that survived the 2004 tsunami without any help from the outside world. According to the 2011 Census, only 15 Sentinelese people including 12 men and three women could be located. However, as per experts, their numbers could be anything between 40 and 400. Chau's body is yet to be recovered and the police are conducting aerial surveys at the place.

PTI quoted P C Joshi, professor of Department of Anthropology at Delhi University as saying, "We have tried but the tribe has not shown any interest. They are the most private of the tribes in the Andamans. They are aggressive and are known to attack outsiders with arrows and stones."

He added saying, "I do not know what made this American visit the island, but this tribe has stayed in isolation for so long that I do not blame them for what they saw as an intrusion and a threat. These people are not specimens for tourists to see. They are extremely vulnerable to diseases and any contact might lead to their extinction. We cannot expose them for a few dollars. We need to respect their choice."