UK Prime Minister Boris Johnson is expected to unveil plans on Monday to develop a "Covid status certification" scheme to enable the safe return of mass gatherings and indoor events as lockdown restrictions eased in England. 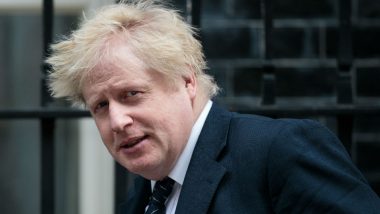 Football cup finals, the World Snooker Championship, a comedy club and a cinema will be used to test vaccine passports over the next few weeks, Xinhua news agency quoted a report by the Guardian newspaper.

The evidence from the trials will be used to consider the wider use of vaccine passports, it said. UK PM Boris Johnson Plans ‘COVID Passport’ Trials To Reopen Mass Events Such As Sports Matches and Night Clubs.

According to the newspaper, the National Health Service (NHS) will set up a system that will allow people to use an app or a paper certificate to gain access to major events.

The system being piloted will take into consideration whether someone has had a vaccination, a recent negative test, or natural immunity after a positive test in the last six months, said the newspaper.

Johnson will set out more details on Monday at a time when his government announced that more than 5 million people in Britain have received their second dose of the vaccine.

However, British lawmakers will want to study the proposals closely with many deeply suspicious about anything which smacks of a "vaccine passport" for domestic use, the Evening Standard newspaper reported.

More than 40 Conservative lawmakers have publicly declared their opposition to the idea, and Johnson could struggle to get the plan through the British Parliament if they decide to oppose it, said the London-based newspaper.

In developing the scheme, officials will take into account three factors, whether an individual has received the vaccine, has recently tested negative for the virus, or has "natural immunity" having tested positive in the previous six months.

The Prime Minister will also outline the government's approach for easing restrictions on foreign travel when its global travel task force reports on April 12.

British ministers have made it clear that the ban on foreign travel will remain in place until at least May 17.

When it is finally lifted, it will be replaced by a risk-based "traffic light" system with red, amber and green ratings for countries around the world, local media reported.

This will be based on a range of factors, including the proportion of the population that has been vaccinated, rates of infection, emerging new variants and the country's access to reliable scientific data and genomic sequencing.

Travellers arriving from countries rated "green" will not be required to isolate, although pre-departure and post-arrival tests will still be needed.

For those classed as "amber" or "red", the restrictions will remain as they are will arrivals required to isolate or enter quarantine.

More than 31.4 million people have been given the first jab of the coronavirus vaccine, according to the official figures.

From April 12, non-essential retail, as well as restaurants and pubs, if serving people outdoors, will be allowed to reopen in England.

On February 22, Johnson had announced his roadmap exiting the lockdown, the third of its kind since the start of the pandemic.

The four-step plan is expected to see all legal restrictions in England being removed by mid-June.

Experts have warned the UK is "still not out of the woods" amid concerns over new variants and the third wave of pandemic in the European continent.

(The above story first appeared on LatestLY on Apr 05, 2021 10:51 AM IST. For more news and updates on politics, world, sports, entertainment and lifestyle, log on to our website latestly.com).