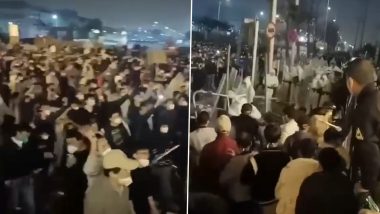 The sound of shouts and the smashing of glass pierced the night air in the southern Chinese city of Guangzhou, as the defiant and frustrated protesters clashed with riot police carrying shields. China Anti-Lockdown Protests: Chinese Security Agency Calls for Crackdown on ‘Hostile Forces’ After Demonstrations Against Zero-COVID Policy.

Hundreds of riot police, seen wearing hazmat suits for the first time, advanced towards the protesters and were seen dragging the screaming protesters away to unknown locations in dystopian scenes.

The violent protests mark some of the strongest dissent China has seen for over 30 years - but despite Beijing cracking down on protesters with ruthless violence, demonstrators are still defiantly turning out on the streets and fighting back against Xi's officials, Daily Mail reported.

There have been violent protests in China before - but these protests, which have extended from Beijing to Shanghai, are different because they are spontaneous, nation-wide and directed at the central government. The protests mark the most overt threat against Xi's government and his brutal Communist regime since he took power 10 years ago, Daily Mail reported.

Watch angry protestors throw stuff at the Police force in a never-seen-before demonstration against govt:

Protests are erupting across China as people have had enough of the draconian zero Covid lockdowns. This is what eventually happens when people power mobilises against oppressive governments that take away freedoms and human dignity. pic.twitter.com/NsZgZTxEYT

In Guangzhou, angry protesters threw anything they could find -

including glass bottles - at the police officers, who cowered under

The violent clashes prompted a fierce rebuke, with officers dragging

screaming protesters away to unknown locations.

Earlier on Tuesday night, locals shopping in a market watched on as a steady stream of riot police officers marched in formation through the streets of Guangzhou. China: Anti-Lockdown Protests Rage Against Restrictions Imposed To Contain COVID-19 Spread, Videos Show People Breaking Barricades in Wuhan and Others Cities.

The arrival of hundreds of riot police escalated tensions in the city and video shows demonstrators throwing glass bottles at the officials in chaotic and violent scenes.

The riot police were seen tightly bunched together, with rows of officers protecting themselves from the incoming onslaught of glass with their see-through shields. In the video, people could be seen screaming and shouting in frustration at the brutal crackdown against protesters who are demonstrating against Xi's zero-Covid policy which has seen millions placed under strict lockdowns for months, Daily Mail reported.

(The above story first appeared on LatestLY on Nov 30, 2022 06:22 PM IST. For more news and updates on politics, world, sports, entertainment and lifestyle, log on to our website latestly.com).