Coinbase, one of the leading cryptocurrency exchanges, has blocked over 25,000 addresses related to Russian individuals or entities engaged in illicit activity. 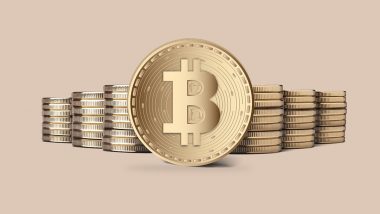 New Delhi, March 8: Coinbase, one of the leading cryptocurrency exchanges, has blocked over 25,000 addresses related to Russian individuals or entities engaged in illicit activity. Coinbase said when a user opens an account, it checks provided information against a list of sanctioned individuals or entities provided by US, the UK, European Union, UN, Singapore, Canada, and Japan, as well as blocking users from sanctioned areas such as Crimea, North Korea, Syria, and Iran.

"If someone has opened a Coinbase account and is later sanctioned, we use this ongoing screening process to identify that account and terminate it. Because sanctions evaders often try to mask their identities, Coinbase also proactively works to map transactions beyond the entities and individuals specifically flagged by governments," it said in a statement late on Monday. Cryptocurrency Adoption Reportedly Helping Russia Dodge Financial Sanctions, Vladimir Putin May Legalise Crypto.

"Through advanced blockchain analysis, we proactively identified over 1,200 additional addresses potentially associated with the sanctioned individual, which we added to our internal blocklist," said Paul Grewal, Chief Legal Officer. The company revealed that it keeps a list of accounts held by sanctioned people outside of Coinbase.

"When the United States sanctioned a Russian national in 2020, it specifically listed three associated blockchain addresses," it said. "Through advanced blockchain analysis, we proactively identified over 1,200 additional addresses potentially associated with the sanctioned individual, which we added to our internal blocklist."

Coinbase also claimed that digital assets are able to "naturally deter common approaches to sanctions evasion". Several of the blocked Russian individuals or entities Coinbase identified through its own proactive investigations.

"The Russian government and other sanctioned actors would need virtually unobtainable amounts of digital assets to meaningfully counteract current sanctions. The Russian central bank alone holds over $630 billion in largely immobilized reserve assets," it informed. That's larger than the total market capitalisation of all but one digital asset, and 5-10 times the total daily traded volume of all digital assets.

(The above story first appeared on LatestLY on Mar 08, 2022 04:35 PM IST. For more news and updates on politics, world, sports, entertainment and lifestyle, log on to our website latestly.com).