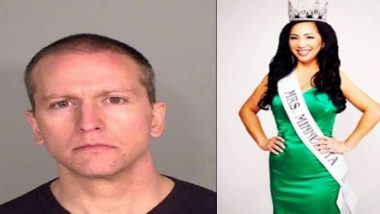 Minneapolis, June 1: Kellie Chauvin, the wife of shamed Minneapolis cop Derek Chauvin, fulfilled her promise of seeking a divorce over husband's alleged ruthless murder of African American George Floyd. The former pageant winner filed her divorce petition before a local court, stating that she wants to separate from her husband of 10 years due to the "irretrievable breakdown" in their marriage. Derek Chauvin, Minneapolis Cop Accused of Killing George Floyd, Taken Into Custody.

The divorce petition, accessed by a leading news portal, found that the 45-year-old has sought no amount in alimony, or any other form of financial assistance, from the murder-accused policeman. Kelly stated that she would not even claim a "penny" from her disgraced husband, Daily Mail reported after gaining access to a copy of her divorce plea.

Kellie, in her initial reaction to the footage which saw her Derek kneeling on Floyd's death - which ultimately lead to his death, said she would be separating from her husband over the ghastly act committed by him. Notably, she herself is not a white American and had migrated to the nation from Laos.

A former winner of the  Mrs Minnesota America beauty contest, Kellie had tied the knot with Derek in July, 2010. The relationship between them began shortly before, when the coup had brought a suspect to the hospital in Minnesota where she was briefly employed.

Derek, meanwhile, is currently under police custody and charged with third-degree murder. He was arrested on Friday, following four days of raging protests across Minnesota seeking justice for Floyd.

The agitation has snowballed into a black rights' movement, with demonstrators in several parts of the country organising rallies to protest against Floyd's murder. The protesters are seeking enhanced legislative and legal measures to safeguard the rights of African Americans.

(The above story first appeared on LatestLY on Jun 01, 2020 11:02 PM IST. For more news and updates on politics, world, sports, entertainment and lifestyle, log on to our website latestly.com).