Donald Trump Suspends H1B And Other US Work Visas Till End of 2020; Here's How It Will Affect Workers From India 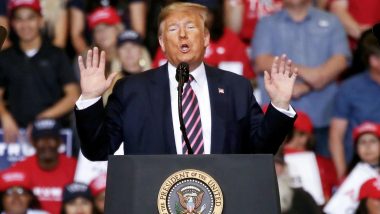 Washington, June 23: US President Donald Trump suspended temporary work visas including the H-1B, H-4, H-2B visa, J and L visas till the end of the current year on Monday. According to a Forbes report, the new restrictions are expected to prevent about 525,000 workers from entering the country between now and the end of the year, including 170,000 Green Cardholders who have been barred from coming to the US since April.

As per reports, the order will grant exemptions for health-care workers focused on treating and researching coronavirus, and also broadly exempts workers in the food and agriculture industries. Donald Trump Suspends Temporary US Work Visas, Including H-1B Till Year-End.

The decision has been widely criticised from multiple businesses including tech companies and manufacturers. They claim that the ban will block their ability to hire critically needed foreign workers for jobs that Americans are not willing or capable of performing.

Here's what Congressman Raja Krishnamoorthi has to say:

I’m deeply disappointed by President Trump’s misguided order to suspend H-1B and other key work visa programs. I urge him to reverse this decision to help ensure our health care system and economy are ready to combat the next phase of this pandemic and to create the jobs we need. pic.twitter.com/tz5j81cKNf

How Will It Affect Workers From India:

According to reports, Over three-to-four lakh H-1B visa workers in the US are employed by Indian IT firms like Infosys, Tata Consultancy Services (TCS), Wipro and Cognizant. The ban is expected to severely affect Indian IT firms and their ability to complete their projects on time.

An official statement by the White House read, "Many workers have been hurt through no fault of their own due to coronavirus and they should not remain on the sidelines while being replaced by new foreign labour. With some exceptions, we should not permit large numbers of foreign workers to enter the United States at a time when so many Americans are out of work."

What is H1B Visa?

The H-1B visa is a non-immigrant visa that allows US companies to employ foreign workers in speciality occupations that require theoretical or technical expertise. An L-1 visa is a visa document used to enter the US for the purpose of work. It is a non-immigrant visa, and is valid for a relatively short period of time, from three months to five years, based on a reciprocity schedule

(The above story first appeared on LatestLY on Jun 23, 2020 09:41 AM IST. For more news and updates on politics, world, sports, entertainment and lifestyle, log on to our website latestly.com).

Comments
Tags:
Donald Trump H1B US president US Visa US Work Visa Visa What is H1B Visa?
Comments
You might also like