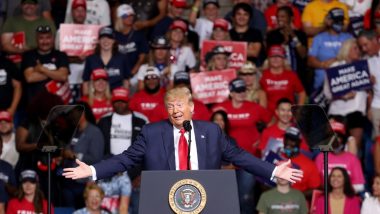 Oklahoma, June 28: A clip has emerged online of US President Donald Trump's campaign Volunteers removing the “Do Not Sit Here, Please!” social distancing stickers from the seats in the arena where President Trump addressed a rally that many health experts criticised that the gathering could lead to a surge in COVID-19 cases. Donald Trump Tulsa Rally: Oklahoma Watch Reporter Paul Monies Tests Positive for COVID-19 After Attending US President's Rally.

In the clip shared by The Washington Post, Trump campaign workers can be seen removing the stickers from seats at the BOK Center in Tulsa, Oklahoma. The stickers were placed at the Center to maintain social distancing and minimise the spread of COVID-19. The President had held his rally on June 20.

The removal violated specific instructions from the BOK Center.

At that time, COVID-19 cases were rising sharply in Tulsa, and Trump was criticised for holding a massive rally amid the pandemic. As a part of the safety plan, the management had affixed do-not-sit stickers on nearly every other seat.

However, Trump's campaign told the management to stop and started removing the stickers ahead of Trump's arrival. A senior executive of BOK Center told Billboard magazine: “They also told us that they didn’t want any signs posted saying we should social distance in the venue.”

Meanwhile, since President's Tulsa rally, eight Trump staffers have tested positive for the infection. Several others have also been directed to self-quarantine.

(The above story first appeared on LatestLY on Jun 28, 2020 02:23 PM IST. For more news and updates on politics, world, sports, entertainment and lifestyle, log on to our website latestly.com).