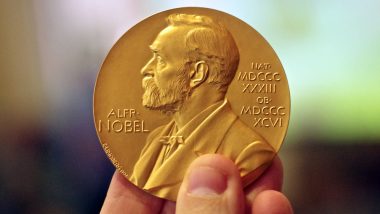 The Chemistry Laureates have taken control of evolution and used the same principles – genetic change and selection – to develop proteins that solve humankind’s chemical problems. Frances Arnold, awarded the 2018 Nobel Prize, conducted the first directed evolution of enzymes, which are proteins that catalyse chemical reactions. Enzymes produced through directed evolution are used to manufacture everything from biofuels to pharmaceuticals.

George Smith developed a method known as phage display, where a bacteriophage – a virus that infects bacteria – can be used to evolve new proteins. Sir Gregory Winter, awarded the Nobel Prize in Chemistry, has used phage display to produce new pharmaceuticals.

On Tuesday, Nobel Prize in Physics was awarded to Arthur Ashkin and the other half jointly to Gérard Mourou and Donna Strickland. The laureates were awarded the Nobel Prize for groundbreaking inventions in the field of "laser physics”. 2018 Nobel Prize: Watch Live Streaming of Prestigious Award Season, Know All the Winners From Peace to Medicine Online.

Nobel Prize for Peace will be declared on October 5 and the prestigious award for Economic Sciences will be declared on October 8. The Swedish Academy has decided to postpone the 2018 Nobel Prize in literature. On Monday, Jean-Claude Arnault, the man at the centre of a sexual abuse and financial misconduct scandal that forced the postponement of this year’s Nobel prize in literature, has been convicted of rape. One of the other reason for debate this year was also regarding the low representation of women laureates in fields such as sciences. In a positive news to this debate, Donna Strickland on October 2 became the third woman in 55 Years to Win Nobel Prize in Physics.

(The above story first appeared on LatestLY on Oct 03, 2018 03:19 PM IST. For more news and updates on politics, world, sports, entertainment and lifestyle, log on to our website latestly.com).