Aviation Minister Ghulam Sarwar Khan disclosed in the National Assembly last month that there were 860 active pilots in the country and 260 pilots had not sat their exams themselves and almost 30 per cent of the pilots had fake or improper licence and did not have flying experience. 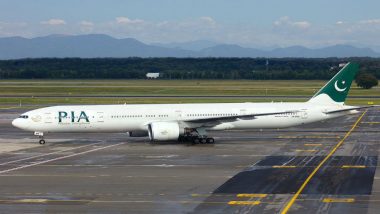 Islamabad, July 11: Pakistan's aviation authority has cleared 95 per cent licences of the country's pilots serving in different airlines in seven countries, while the process of verification of the remaining will be completed next week, according to a media report on Saturday.

Aviation Minister Ghulam Sarwar Khan disclosed in the National Assembly last month that there were 860 active pilots in the country and 260 pilots had not sat their exams themselves and almost 30 per cent of the pilots had fake or improper licence and did not have flying experience. Pakistan Shells Border Area Along LOC in Rajouri, Indian Army Personnel Killed.

Shortly after the minister's statement, the Pakistan International Airlines (PIA) grounded 107 pilots suspected of having fake licences and the Civil Aviation Authority (CAA) started verification of their licences, Dawn reported. The aviation minister also announced that five senior officials of the CAA had been sacked over the scandal and they could be prosecuted.

The ‘dubious' licences issue also caught the attention of other countries and airlines where Pakistani pilots were employed, and they grounded the Pakistani pilots and asked the Aviation Division to verify their credentials included the United Arab Emirates, Malaysia, Vietnam, Turkey and Bahrain.

The UAE GCAA had also asked the Pakistani authorities to clarify the difference between "fake" and "suspect" cases, if any, so that they could take immediate and appropriate action in the interest of safety of flight operations.

Of the 11 Pakistani pilots, the licences and credentials of 10 had been verified and sent back to the authorities concerned, while the verification of the remaining one would be completed by Tuesday next week, they said.

On July 2, the Civil Aviation Authority of Malaysia (CAAM) had announced temporary suspension of Pakistani licence holders employed in Malaysia. The CAAM sent a list of 14 Pakistani pilots for verification of their licences. The Pakistan CAA verified the credentials of all the pilots and informed the Malaysian authorities accordingly.

Sources said that three airlines of Turkey also sought verification of licences of 19 Pakistani pilots. The verification of 18 pilots has been done, while that of one is under process.

Likewise, the Bahrain Aviation Authority asked the Pakistan CAA to verify the credentials of three Pakistani pilots. Of the three verifications, two had been completed and sent back, while the remaining one is under process.

PIA Chief Executive Officer Air Marshal Arshad Malik met Prime Minister Imran Khan and briefed the latter on ongoing negotiations with European Union Aviation Safety Agency to ensure PIA flight operations for Europe. He also briefed the premier on restructuring of the PIA so as to make it a profitable and leading airline.

The prime minister directed the PIA chief to expedite the restructuring plan in consultation with Adviser to the PM on Institutional Reforms Dr Ishrat Hussain and present a framework in a week's time, the paper said.