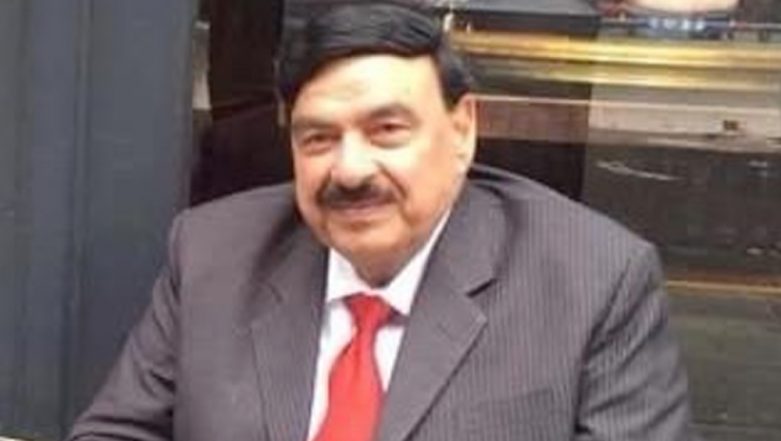 Islamabad, August 23: Railway Minister Sheikh Rashid Ahmed was allegedly assaulted in the UK by two officials of the Pakistan Peoples Party (PPP) who pelted him with eggs and also punched him for using "abusive language" for their party leader Bilawal Bhutto Zardari. The alleged assault took place on Tuesday when Ahmed, who is also the chief of the Awami Muslim League (AML), came out from a hotel after attending an awards ceremony in London. Imran Khan and Donald Trump Have Similar Personalities, God Have Mercy, Says Pakistan Railway Minister Sheikh Rashid.

The "attackers" fled the scene but on Wednesday two officials of the PPP in the UK -- Asif Ali Khan, President People's Youth Organisation Europe; and Samah Naz, General Secretary for Greater London Women's Wing -- issued a statement saying that they had attacked Ahmed, the News International reported on Friday.

AML's UK President Saleem Sheikh told the News International that he would be speaking to Ahmed to get his permission for the registration of a police case against the attackers.

"We saw Asif Khan and a woman being involved in the attack but they ran away from the scene and there was no video proof of their shameful act but now both have come out and claimed the attack. We will decide whether to report them to the police or not after speaking to Sheikh Rashid Ahmed," he said.

Saleem Sheikh claimed that the attack was "pre-planned" as not many people knew that Ahmed would be stepping out of the venue using the side exit of the building.

Asif Ali Khan and Samah Naz, meanwhile, claimed that Ahmed had been continuously using "abusive language during interviews against our Chairman Bilawal Bhutto Zardari. He should be thankful we only used eggs as a British way of dealing with such uncivilised politician. He started this we ended it".