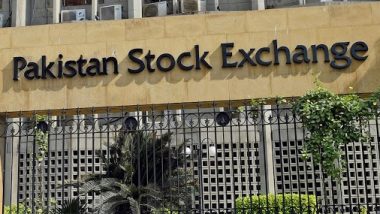 Islamabad, June 29: At least two people have been killed after terrorists opened fire and attacked the Pakistan Stock Exchange (PSX) in Karachi on Monday. According to details by Pakistani media, people from the building are being evacuated. According to details by Pakistani website Geo News, the gun and grenade attack at the Pakistan Stock Exchange in Karachi is currently going on. The report informs that at least two civilians have died and three have been injured in the terror attack.

According to Police, all the four terrorists have been killed. The terrorists came out of their vehicle a little before 10 am and launched the attack at the compound entrance and tried to barge into it. Police and Rangers officials arrived at the scene soon after the attack and killed four terrorists, Sindh Rangers said. The report added saying that four militants have stormed the PSX building and opened indiscriminate fire there. Militants launched a grenade attack at the main gate of the building and stormed the building after firing indiscriminately.

(The above story first appeared on LatestLY on Jun 29, 2020 11:33 AM IST. For more news and updates on politics, world, sports, entertainment and lifestyle, log on to our website latestly.com).