U.S. President Donald Trump has said a decision on action in Syria will be made "fairly soon". 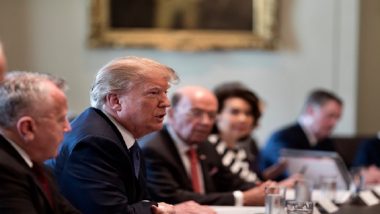 U.S. President Donald Trump has said a decision on action in Syria will be made "fairly soon". He told reporters that he and his team were looking "very, very seriously" at the situation, following an alleged chemical attack on the town of Douma.

But, the timeline is a scale down from his earlier stand of “taking a decision in the next 24 to 48 hours”. He amended his earlier warning of a swift military strike against Syria in retaliation for a suspected chemical weapons attack on civilians, saying it "could be very soon or not so soon at all".

"Never said when an attack on Syria would take place," Trump wrote on Twitter.

Never said when an attack on Syria would take place. Could be very soon or not so soon at all! In any event, the United States, under my Administration, has done a great job of ridding the region of ISIS. Where is our “Thank you America?”

The U.S's allies too have hardened their stand in response to news of the chemical attack. On Thursday, French President Emmanuel Macron said he had "proof" that the Syrian government had attacked Douma with chemical weapons.

In the UK, cabinet ministers agreed "on the need to take action" in Syria to "deter the further use of chemical weapons", the office of Prime Minister Theresa May said. May spoke with President Trump late on Thursday and they agreed to "keep working closely" on the issue, her office said in a statement.

The White House says President Trump will also speak to his French counterpart. The UN Security Council is to hold an emergency meeting later to discuss the crisis.

On Wednesday, even though Trump had previously said he would not "broadcast" his moves in Syria, he said in a post on Twitter that missiles "will be coming, nice and new and 'smart!'"

However, U.S. Defense Secretary James Mattis struck a more cautious tone later on Wednesday telling a congressional panel: "I believe there was a chemical attack and we are looking for the actual evidence."

The international Organisation for the Prohibition of Chemical Weapons (OPCW) is set to send monitors to Douma to gather evidence about the attack which ground activists allege was a poisonous chemical fired at residents by dropping barrel bombs on the residents of Douma. The exact death toll is yet to be confirmed but the White Helmet group reports that atleast 50 people including children died in what could have been a chlorine gas attack.

(The above story first appeared on LatestLY on Apr 13, 2018 07:48 AM IST. For more news and updates on politics, world, sports, entertainment and lifestyle, log on to our website latestly.com).