UK Prime Minister Theresa May will meet Graham Brady, the chairman of an influential committee of backbench Tory MPs, amid calls for her to set a resignation date, the media reported on Tuesday. 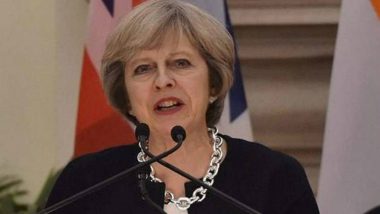 London, May 7: UK Prime Minister Theresa May will meet Graham Brady, the chairman of an influential committee of backbench Tory MPs, amid calls for her to set a resignation date, the media reported on Tuesday.

It follows a request from the 1922 committee -- an elected body of MPs which represents backbenchers and also oversees leadership contests -- for "clarity" on the issue, according to the BBC.

No 10 insists the meeting is routine but reports say that Brady is likely to press May for a timetable for her departure. On Monday, Treasurer of the 1922 committee Geoffrey Clifton-Brown told the BBC that the Prime Minister should announce a "road map" for her resignation after the European elections set for May 23.

Meanwhile, cross-party talks to break the Brexit deadlock are due to resume. In March, May pledged to quit if and when Parliament ratified her Brexit withdrawal agreement with the EU -- but she has not made it clear how long she intends to stay if no deal is reached.

The UK had been due to leave the EU on March 29, but the deadline was pushed to October 31 after Parliament was unable to agree a way forward. Leading Eurosceptic Bill Cash also told the Press Association "the time has come" for her to resign. "She needs to be given a date. The sooner the better. But it needs to be done in an orderly manner," he said.

The Prime Minister has blamed the Brexit impasse for the losses and called on both sides to compromise to agree a deal. However, tensions remain as talks between the government and Labour resume.

Labour's Shadow Chancellor John McDonnell has said he does not trust May, after details from cross-party talks were leaked to the press, and accused her of having "blown the confidentiality" of the talks.

Reports emerged at the weekend that the Prime Minister was ready to offer a temporary customs arrangement with the EU that would last until the next general election.

(The above story first appeared on LatestLY on May 07, 2019 02:41 PM IST. For more news and updates on politics, world, sports, entertainment and lifestyle, log on to our website latestly.com).