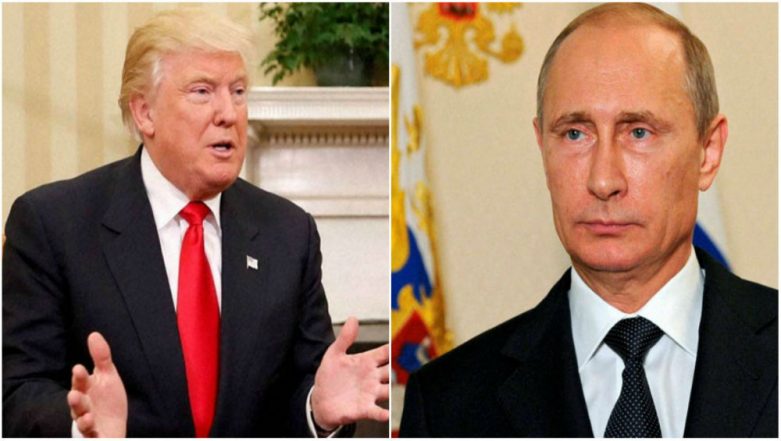 Washington, May 4: US President Donald Trump has said he spoke with Russian President Vladimir Putin in an hour-long call, covering issues including the "Russian Hoax".

"Had a long and very good conversation with President Putin," the US President tweeted, the BBC reported on Friday.

Trump rebuked a reporter who asked whether he had warned Putin against meddling in the 2020 elections. Russian Internet Bill: Vladimir Putin Signs Controversial Law 'Disconnecting' His Nation to World Wide Web.

It was their first conversation since the Mueller report cleared Trump of colluding with Russia on the 2016 vote.

The Kremlin confirmed in a statement the two had spoken, saying the call had been initiated by the White House.

Trump tweeted on Friday about their latest conversation: "As I have always said, long before the Witch Hunt started, getting along with Russia, China, and everyone is a good thing not a bad thing."

When asked in the White House on Friday whether he had warned Putin that Moscow should not interfere in the next US presidential election, Trump told the reporter she was "very rude".

"We didn't discuss that," he said.

"Getting along with countries is a good thing and we want to have good relations with everybody."

But the White House said the matter of alleged Russian meddling had been broached in the call.

Press secretary Sarah Sanders said: "Very, very briefly it was discussed, essentially in the context of that it's over and there was no collusion, which I'm pretty sure both leaders were very well aware of long before this call took place."

Sanders also said Trump and Putin had briefly discussed the investigation by US Special Counsel Robert Mueller into alleged Russian interference in the 2016 presidential election.

The White House press secretary described the call as an "overall positive conversation".

A redacted version of the special counsel's report was made public last month. It did not determine that the Trump campaign conspired with Russia, but it detailed repeated efforts by Trump to thwart an investigation he feared would end his presidency.

Mueller concluded his inquiry could not exonerate Trump of obstruction of justice, noting Department of Justice guidance that a sitting president cannot be criminally charged.