What is US Presidential Transition? Key Things to Know About The Process For Transfer of Power From Donald Trump to Joe Biden

In simple words, the presidential transition means the transfer of power or presidency from outgoing President to the President-elect. 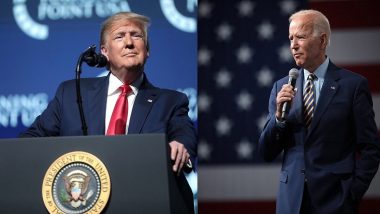 Washington, November 24: Although outgoing US President Donald Trump is yet to concede to President-elect Joe Biden, he has endorsed a move by the General Services Administration (GSA) to begin the country's presidential transition process so that the Democrat can be sworn in on 20 January. The GSA manages federal properties and supports the basic functioning of federal agencies. Donald Trump Finally Agrees to Joe Biden Transition; Vows to Keep Fighting Election Outcome.

As part of the US presidential transition, Emily Murphy, the Administrator of the General Services Administration, reached out to Joe Biden's team, asserting that her decision was influenced by none. Biden's team welcomed the move and described Murphy’s decision a "needed step to begin tackling the challenges facing our nation". Joe Biden Picks Antony Blinken as Secretary of State, John Kerry as Climate Envoy, Alejandro Mayorkas to Head Homeland Security.

What is Presidential Transition?

Following ascertainment by the GSA, the team of a president-elect gets access to federal funds, office spaces and officials. During the transition period, a president-elect selects people for White House staff, cabinet posts and key government positions. S/he has to name about 4,000 political appointees, including 1,200 individuals who need approval from Senate, the upper house of the US Congress.

The transition process culminates before the Inauguration Day, which is constitutionally scheduled for 20 January. The 2020 transition has been complicated due to Trump's insistence that he was not defeated. Trump could win 232 Electoral College votes compared to Biden’s 306. However, he has refused to concede.

(The above story first appeared on LatestLY on Nov 24, 2020 07:16 PM IST. For more news and updates on politics, world, sports, entertainment and lifestyle, log on to our website latestly.com).