This unhinged Superman decides to take control of Earth for its own good, leading Batman and his allies to attempt to stop him. 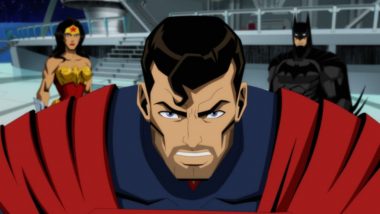 The full voice cast for Warner Bros. Home Entertainment's animated Injustice film has been revealed. The feature will be based on the popular 'Gods Among Us' game as well as Tom Taylor's 'Gods Among Us: Year One' comic. According to The Hollywood Reporter, the story takes place on an alternate Earth where the Joker has tricked Superman into killing Lois Lane, sending the hero on a rampage. This unhinged Superman decides to take control of Earth for its own good, leading Batman and his allies to attempt to stop him. The Flash: 5 Details We Learnt From the New Leaked BTS Stills of Ezra Miller’s Upcoming DC Movie!

The animated movie is being produced by Warner Bros. Animation, DC and Warner Bros. Home Entertainment. 'Injustice: Gods Among Us' launched as both a mobile game and on game consoles in 2013, with the game pitting members of the DC universe against one another in death matches reminiscent of 'Mortal Kombat', also produced by Netherrealm Studios. The game series became so popular that DC launched multiple comics exploring the story. Batman the Long Halloween – Part One Movie Review: A Worthy Adaptation of the Classic DC Comic Storyline (LatestLY Exclusive).

As per The Hollywood Reporter, Rick Morales, known for 'Mortal Kombat Legends: Scorpion's Revenge', is producing. Justice League Dark's Matt Peters is directing the film from a script by 'Batman: Hush' scribe Ernie Altbacker. Jim Krieg is also producing the film, with Sam Register executive producing it. 'Injustice' is expected to debut on home entertainment this fall.